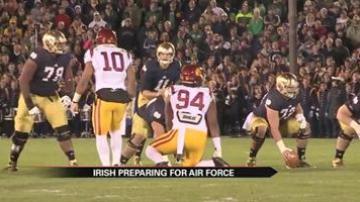 Having quarterback Tommy Rees injury-free this week is about more than starting their first-string quarterback for the Fighting Irish, it's also about consistency for the offense.

“Tommy Rees had a good week, having that continuity at the quarterback position Tuesday, Wednesday and Thursday is always good for the unit,” Irish Head Coach Brian Kelly said.

Rees would agree with his coach that consistency is important--in practice and on game day.

“We have a lot of respect for the guys at Air Force and what they do. For us, this week is about us and our preparation and our focus and we have to have the same intensity every week,” Rees said.

Although Air Force has lost five games straight with a defense that has given up a total of 263 points and 3,421 yards so far this season, the Irish say the Falcons are quick on their feet.

“They move a lot on defense so we have to be able to pick up those movements and if we can’t we know there will be big plays. They’re definitely a team that gives different looks and plays with extreme heart,” Irish offensive lineman Zack Martin said.

The Irish are 2-1 on the road and Kelly says the key to that success lies in how his team prepares.

“Our guys have always taken a very good approach to their preparation,” Kelly said.

And this week isn't any different.

Kelly announced Thursday that senior starting right guard Christian Lombard is out for the season after a recent back surgery. Freshman Steve Elmer has stepped into the position, who Kelly says has progressed quickly this season, keeping that continuity for the Irish offense.