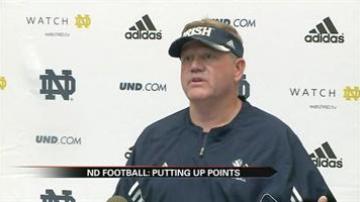 NOTRE DAME, Ind.-- The Fighting Irish head to Arlington, Texas this week to take on the Arizona State Sun Devils at AT&T Stadium in their annual Shamrock Series.

Head Coach Brian Kelly gave his final media briefing before the game and says he wants to see more consistency and balance from the Irish offense. Time and time again, Kelly believes the key to success is in running the football.

Notre Dame's offense has been looking to strike a balance in their pass and run game all season. Kelly says the talent is there, just not the consistency. So, the team and coaching staff used this week to get back to the basics.

This Saturday, Notre Dame goes up against a Sun Devil defense that on average gives up at least 230 rushing yards per game.

In order for the Irish to keep up with the quick and explosive offense of Arizona State, they are going to need to establish themselves on the ground early in the game and for all four quarters.

The strongpoint of the Sun Devil defense is defending the pass, ranked 36th in the nation in their pass coverage, giving up an average of 193 yards per game. So, it couldn't hurt for the Irish offense to develop more of a deep threat in the air.

“I don’t think that our offense can sustain the balance that I’m looking for just out of two tight ends. I think it has to be a significant part of what we do, but we have to spread the field as well,” Kelly said.

Arizona State is ranked 22nd in the AP poll this week and are 3-1 on the season.