Irish tries to keep momentum going in game against Pitt 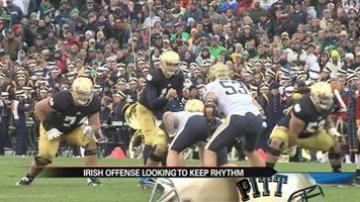 SOUTH BEND, Ind. --- Irish Head Coach Brian Kelly says he's counting on his guys to keep the momentum going this week and find the winning rhythm they've picked up so far this season.

The Irish Offense is proving to be a force, coming off four straight wins with a total of 134 points.

On Defense, after two weeks in a row defending the triple option, against Air Force and Navy, Kelly says his team is excited to go back to what they know best.

"Defensively, get back to playing traditional football, getting away from the option, we played extremely well against USC and we want to build on that," Coach Kelly said.

Pittsburgh's Head Coach Paul Chryst said in a news conference this week that his defense has all eyes on Irish Quarterback Tommy Rees.

"To me the players are the strengths and weaknesses of a football team. I think they're going to play to Tommy Rees's strengths a little bit more," Pittsburgh Head Coach Paul Chryst said.

He goes by "Donald Devastation" and he's one of the best Interior Linemen in the game right now, averaging one sack per game this season.