Irish women defeat Baylor to move on to the Final Four 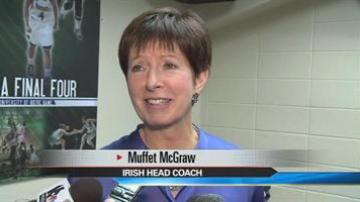 NOTRE DAME, Ind. -- It's official. The Fighting Irish have punched their ticket to the Final Four and are headed to Nashville this weekend.

After losing to Baylor two years ago in the national championship game, Notre Dame found the redemption they had been seeking with an 88-69 victory over the Lady Bears.

The NCAA Regional Championship was a tough, physical game for the Irish against Baylor.

Senior Kayla McBride left the game early with two fouls, so sophomore guard Jewell Loyd stepped up and carried the team. She scored 21 points in the first half.

"To be here with our fans, to have that great crowd that was so loud and so important to the victory and to be able to celebrate with them I can't imagine a better time going to the Final Four," McGraw said.

Senior Natalie Achonwa left the game late in the second half with a knee injury and did not return. She is scheduled to have an MRI Tuesday to determine the severity of that injury.

The Irish will take on the winner of Maryland and Louisville Sunday night with the hopes of returning to a national championship game once again.