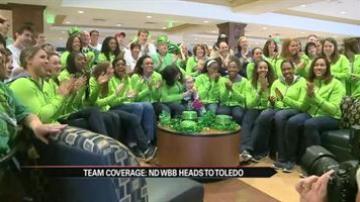 NOTRE DAME, Ind.-- The 32-0 Notre Dame women's basketball team will head to the NCAA tournament for the 21st time. It's their 19th consecutive trip, and this year could be their third time in a row heading to the Final Four.

“I have tremendous confidence in them. I know when we play our A game we are really, really hard to beat. It’s fun to watch us. We have so many strengths, not many weaknesses and it’s our job to keep them focused and keep working on those weaknesses,” Irish head coach Muffet McGraw said.

Senior guard Kayla McBride said the difference this year is that the Irish have powerful players on the floor and on the bench.

The Irish are Toledo bound this weekend to kick off post-season play. They will be just two hours away from the Golden Dome, making Toledo a more than ideal location.

“I think the biggest thing we’re excited to see where we were going to be placed, that was the biggest variable that we weren’t sure about and it was exciting to see that we get to be in Toledo and we’re close enough that our fans can come and support us,” Irish forward Natalie Achonwa said.

Robert Morris' women's basketball team is in the Northeast conference and they are 21-11 on the regular season.

Notre Dame is ranked number two in the country and earned the ACC title this year.