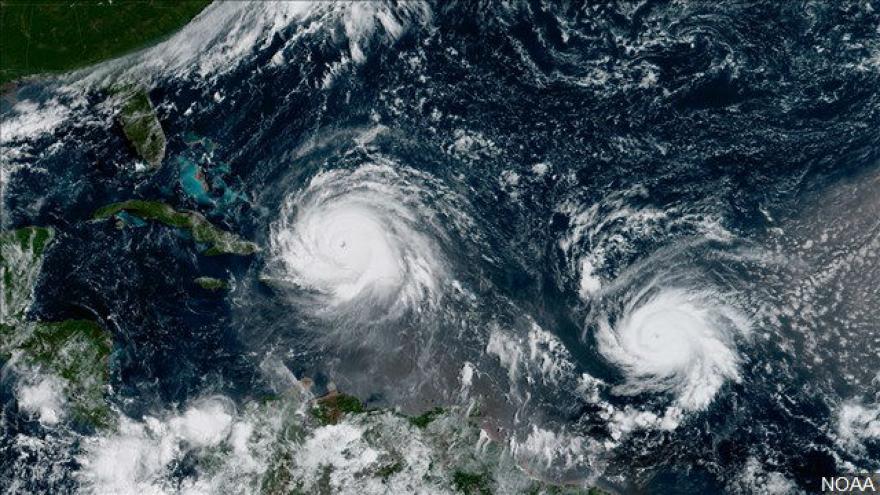 Hurricane Irma, a Category 5 storm, hurtled through the Caribbean, leaving catastrophic damage in its wake as it continued toward South Florida where it could slam into Miami this weekend. Photo courtesy NOAA

(CNN) -- Hurricane Irma, a Category 5 storm, hurtled through the Caribbean, leaving catastrophic damage in its wake as it continued toward South Florida where it could slam into Miami this weekend.

The fast-moving storm barreled between Cuba and the Turks and Caicos Islands early Friday morning, and is expected to move westward toward the Bahamas.

Irma, which has 160 mph maximum sustained winds, has killed at least 10 people as it pummeled small northeastern Caribbean islands such as Barbuda and left hundreds of thousands of customers in Puerto Rico without power.

With models projecting that Irma will head for the US mainland, the National Hurricane Center issued hurricane and storm surge warnings for South Florida on Thursday night.

"It has become more likely that Irma will make landfall in southern Florida as a dangerous major hurricane, and bring life-threatening storm surge and wind impacts to much of the state," the National Hurricane Center had said earlier Thursday.

It warned of possible storm surges that could bring five to 10 feet of water above ground on Florida's coast. Mandatory evacuations have been issued for many counties in South Florida as residents began their mass exodus.

On Thursday, the hurricane center forecast moved the most likely path of the eye of the storm to the west, which means Miami could take a major hit.

"This storm has the potential to catastrophically devastate our state and you have to take this seriously," warned Florida Gov. Rick Scott.

Here are the latest developments

-- Around 2 a.m. ET, Irma's center was about 20 miles north of the Great Inagua Island, which is part of the Bahamas, moving west-northwest with maximum sustained winds of 160 mph. Hurricane-force winds could be felt as far as 75 miles from the center. Irma previously had winds over 180 mph, keeping those speeds longer than any storm ever recorded in the Atlantic basin.

-- Irma is forecast to move toward the southeastern Bahamas Friday morning, then head between the north coast of Cuba and the Bahamas in the next day or two.

-- Irma left at least 10 people dead Wednesday, including four on St. Martin, four in the US Virgin Islands, one on Anguilla, and one on Barbuda, officials said.

-- Hurricane warnings are in effect for parts of Cuba, Haiti, the Turks and Caicos Islands, and the southeastern, central and northwestern Bahamas.

-- Hurricane and storm surge warnings are also in effect for South Florida, extending from Jupiter Inlet on the east coast of the state, southward around the Florida Peninsula to Bonita Beach on the west coast. The hurricane warning included the Florida Keys, Lake Okeechobee and Florida Bay.

Florida and the Southeast brace for Irma

Florida Gov. Scott urged residents to be prepared regardless of which side of the coast they live in the state.

"This is not a storm you can sit and wait through," he said.

Scott said others in Florida need to watch Irma's path and be ready to move.

"You don't have to drive hundreds of miles or leave the state to be safe. Go to shelters," he said.

Evacuees waited for hours at gas stations, stocked up on supplies and sat through massive traffic jams on the interstate. Schools will also be closed Friday.

Also in Florida, Monroe County administrator Roman Gastesi stressed to residents in the Keys that they need to heed the evacuation order and leave.

"You might as well leave now, while you have a chance, because when you dial 911, you will not get an answer," he said.

All hospitals will be closed and ambulances gone as of Friday morning, including air ambulances, Gastesi said.

Florida is not the only state preparing for possible impact. Some computer models show Irma potentially threatening Georgia and South Carolina.

Georgia's Gov. Nathan Deal declared a state of emergency for 30 counties and the state is ordering coastal evacuations for people in the Savannah area and everywhere along the coast east of Interstate 95, starting Saturday.

Barbuda is barely habitable, with about 95% of its buildings damaged, Prime Minister Gaston Browne said on Thursday.

Barbuda, which has 1,800 residents, is one of two major islands in the nation of Antigua and Barbuda. Browne estimated the damage will cost $100 million to rebuild.

"It looks like (a) garbage disposal," Marlon Carr, a photographer who toured the island with the Prime Minister of Antigua and Barbuda, told CNN on Thursday. "There was rubble and roof galvanized all over the island. It looked like some of the houses ... were imploded on."

Witnesses told him of "40-foot containers flying, animals flying" during the storm.

Irma's eye passed directly over Barbuda on Wednesday and now the northeastern Caribbean nation is anxiously watching Hurricane Jose to the east as it strengthened to a Category 3 storm.

On Thursday, Antigua and Barbuda issued a hurricane watch for Jose, which could pass close to those islands Saturday. The government has called for voluntary evacuations from Barbuda, Browne said.

Irma also brought heavy rain and powerful winds to the low-lying Turks and Caicos Islands on Thursday. Residents were told to stay put.

"Fifteen roofs have come off and there's damage to part of the roof of the hospital," Gov. John Freeman told CNN's Anderson Cooper. He added there was "quite a bit of damage" in the capital island of Grand Turk.

The Turks and Caicos are a British overseas territory with about 35,000 people. Officials there are "working intensively on disaster preparedness and response ... (and) liaising with their counterparts in the Cayman Islands for assistance," UK Foreign and Commonwealth Office Minister Alan Duncan said Thursday.

"Some of these Turks and Caicos (Islands) will be completely overwashed," CNN meteorologist Chad Myers said.

Irma is expected to bring massive rainfall, which could cause flash floods and mudslides in parts of Puerto Rico, the Virgin Islands, Dominican Republic, Haiti, the Bahamas, Turks and Caicos islands, Cuba as well as the US.

"This is the largest such evacuation in the history of the country," Prime Minister Hubert Minnis said.

In Puerto Rico, about 56,680 customers were without water, with the island's northeast hit the hardest, according to Jesus Poupart of the emergency operations center. Emergency officials are still taking in reports to determine the extent of the damage.

In the beachside area of Piñones near San Juan, Irma tore the roof off Cristian López's fried-food restaurant. He said he wouldn't be able to reopen the place for about five days.

"At least we are all alive," he said.