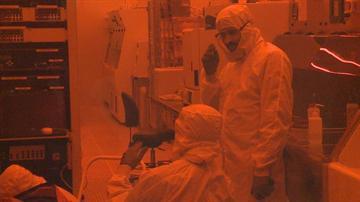 SOUTH BEND, Ind. – It’s been nearly four years since the city of South Bend partnered with the University of Notre Dame to create Innovation and Ignition Parks, which are hoped to make the city a hub for nanotechnology and revitalize the local economy.  So, is it working?

“It’s off to a great start,” said Arnold Phifer, External Relations Director for Notre Dame’s Center for Nano Science and Technology.  “It is starting to spin-off companies and move some of the technologies out of the lab into Innovation Park and then ultimately to Ignition Park.”

“It's not an overnight thing,” Phifer said.  “It's a growing field and it's a little like the Wild West, no one's really sure where the next big discovery's going to come from."

Still, Phifer explained that businesses who can’t afford their own labs have been coming to South Bend to work at Notre Dame’s facilities.  Corporations are also starting to invest in the university’s research into nanotechnology, which can be used in a wide variety of ways.

“It covers so many fields, it covers biology, it covers new materials, it covers solar energy,” he described.  “People are anticipating advances in all those areas.”

The programs to develop technology in South Bend have received funding through the state, the federal government and from investors.  Local lawmakers are pushing to add more state funding to the development of nanotechnology.  State Representative Ryan Dvorak (D – South Bend) is sponsoring a bill to allow nanotech companies to receive funding through Indiana’s 21st Century Technology Fund.

"We've got top flight research going on and the goal is to get that spun-off into local start-up companies that can really spur economic development in the future,” Dvorak explained.  “I think we've got a realistic shot at doing that."

Though the research is being done by top researchers with numerous degrees, Arnold Phifer explained that once companies start producing nanotechnology as a product they’ll need some of the manufacturing skills workers in South Bend can provide.

“You need more practical, applied engineers and machinists and workers that can handle that and this area’s known for having expertise in that area,” he described.  "What we're seeing in a few cases with some companies that are moving into Innovation Park, hiring businesses in the area to handle some of the fabrication and the bigger scaling up of new products."

Representative Dvorak said he hoped his bill will be passed sometime in this legislative session, it’s currently still in committee.