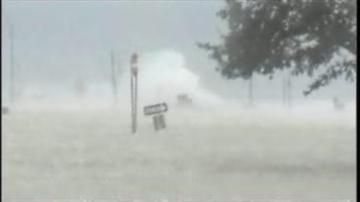 NEW ORLEANS -- The new $14 billion levee system put into place in the wake of Hurricane Katrina is being put to the test as Isaac batters the Gulf Coast.

Hurricane Isaac is posing a triple threat to the region with strong winds, heavy rain and powerful storm surges.

And many people in the storm's path did not evacuate in time.

"It's horrible. Everybody's house is gone! Nobody got house... nobody!" said Cheryl Hicks, a resident who had to be rescued.

Another resident tried to make her way out in her car but was forced to stop because she could not see where she was going.

""We were trying to leave but, trying to drive in the car, you couldn't see in front of your face!" said Sharon Sylvia.

Hurricane Isaac could dump as much as 20 inches of rain.

Hundreds of thousands of homes are currently without power.