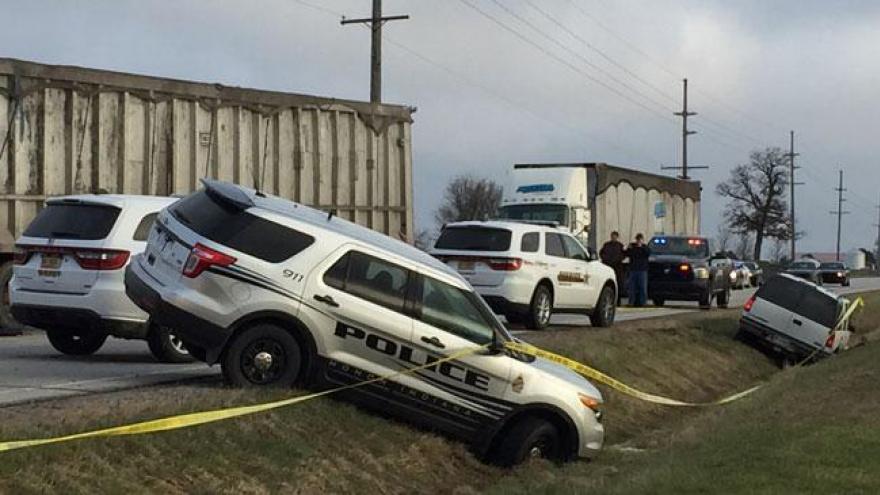 Indiana State Police are investigating the fatal shooting of a suspect who allegedly abducted a juvenile from a home in Warren County, Indiana.

ISP says the driver of a 1999 white GMC Yukon pulled up to a residence in Warren County, dragged a female juvenile to his vehicle and drove away.

A description of the suspect's vehicle was broadcast to neighboring cities and counties and the Indiana State Police.

Deputies with the Tippecanoe County Sheriff's Department located the Yukon and attempted a traffic stop.

The driver failed to stop for deputies and led them on a pursuit through Tippecanoe, Carroll and White counties.

Stop sticks were deployed successfully several times and several of the Yukon's tires were flattened.

The driver continued through Monticello with deputies from Tippecanoe and White counties, ISP troopers, and officers with Monticello and Flora police departments assisting, ISP said.

The driver continued on US 24 towards Reynolds when the driver turned north on US421 towards Monon.

The Monon Marshal deployed stop sticks on the edge of town and the Yukon drover over them, but continued through town.

On US421 near SR114, a sheriff's deputy drove off the side of the road to avoid a collision with a semi and the Yukon continued north on 421 and struck both the semi and the deputy's vehicle.

The Yukon drove off the road into the ditch and came to a rest.

The driver of the Yukon got out of the vehicle with a weapon and made threatening gestures towards officers, police said.

The suspect was shot and killed.

The juvenile was not injured.

No officers were injured in the shooting.

The name of the suspect is being withheld pending next of kin notification.