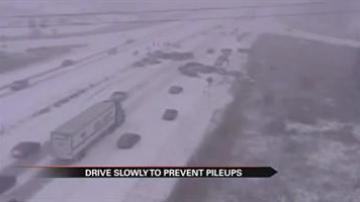 SOUTH BEND, Ind. -- A 70-car pile-up in Wisconsin seriously injured several people. A tower camera nearby captured the entire incident as it happened. Indiana State Police say it serves as a warning to drivers in Michiana.

"The obvious problems to me with this are that people are driving too fast. I mean that is the one thing that we tell people. Winter driving in Michiana at its best is not very good," said Smith.

Smith says in the 19 years he's served as a state trooper, he's thankful we haven't seen an accident quite like this one, but there are a few things to learn from it.

Don't get out of your car immediately.

"Typically- 99 percent of the time, the safest place for you to be is in your vehicle," said Smith.

Smith says drivers often become disoriented after the crash and get out to take pictures or talk to other drivers, but that puts them in harm's way.

"Chances are pretty good that the person behind you is going to run into the same scenario so we don't want them to crash into you. We don't want you in the road and somebody hits you," said Smith.

He says he hopes this video will remind people to hang back - don't follow so closely.

"When you go past a mail box and when that person drives past you count one thousand one, one thousand two. That's when the front of your car should go past it. You need to double or triple that distance in bad icy conditions or where the visibility is bad," said Smith.

Sometimes speed doesn't matter because it's just too icy.

If that's the case and you wreck, stay in your car and call the police.

You should get out of your car if it starts smoking, catches fire or is in water.