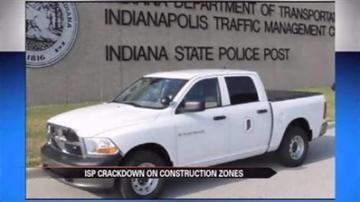 SOUTH BEND, Ind.-- As a record number of travelers hit the road, Indiana state police want to cut down speeding and tailgating in construction zones. Cops plan to be on high alert this holiday and have some new equipment to help the effort.

"Cars don't slow down and I'm like people are passing me in the 45 zone," said Julie Miller, South Bend resident.

She's talking about contruction zones. This time of year, there seems to be one every couple miles. That's why Indiana State Police troopers are cracking down on drivers who follow the car in front too closely.

"I often wonder. Where are the cops?" said Miller. "Why is this guy on my tail and nobody's stopping him?"

Miller isn't the only driver frustrated with tailgaters.

The undercover vehicle looks like the average white construction pick-up truck. They'll blend right in, but a police officer will be behind the wheel.

"What they're out there looking for: people who are driving unsafe through construction zones, whether that's following too closely, speeding, driving distracted," said Matt Deitchley, INDOT. "All the kind of things you don't want to see when you're a worker out on the roads in these construction zones."

The workers won't be on site this holiday, but the undercover trucks will be. Equipped with a laser light-- called lidar--police can measure the distance between cars and ticket those who are too close for comfort.

"A good rule of thumb if you're out driving to make sure you're not following too closely is the two second rule," said Deitchley. "You can watch the end of the car in front of you and count two seconds before your car reaches that area."