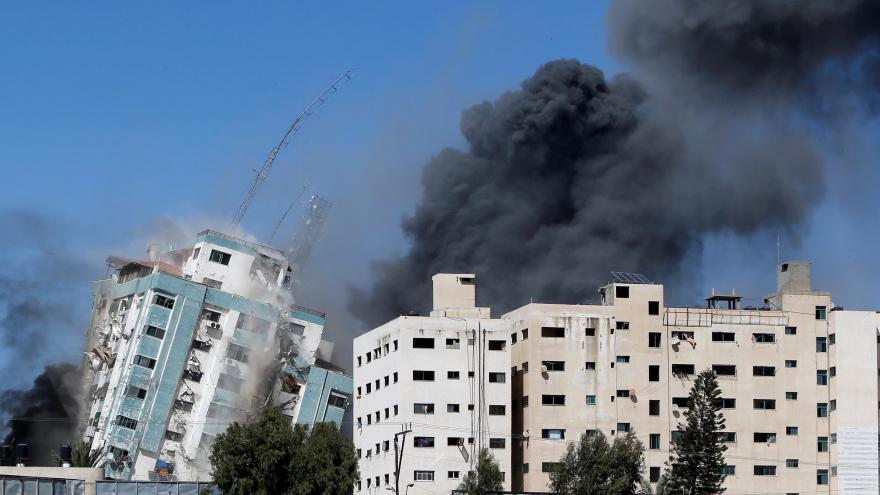 (CNN) -- Israel bombed a house in Gaza where a family had gathered to celebrate the end of Ramadan and an office housing international media as a new flurry of Hamas missiles rained down on Tel Aviv Saturday, increasing fears that a de-escalation of the conflict could soon be out of reach.

The Jala'a building, which was hit by an Israeli airstrike on Saturday afternoon, contained offices for Al Jazeera and the Associated Press, among other media outlets, marking the latest escalation of violence that has spread across Israel and the Palestinian territories this week -- the conflict's bloodiest in recent years.

Israel launched more airstrikes on Gaza overnight, with Hamas retaliating with missiles on Saturday. In less than a week, Israeli airstrikes killed more than 130 people and at least 1,000 others injured in Gaza alone, the Palestinian Health Ministry in Gaza said, as rioting and mob violence between Arabs and Jews marred cities and towns throughout Israel.

Hamas fired dozens of missiles towards Tel Aviv on Saturday, with Al-Qassam Brigades, the militant wing of Hamas, saying in a statement the move was in direct retaliation for Israeli airstrikes on a Gazan refugee camp. A 50-year old man was killed early Saturday afternoon after a rocket hit a series of buildings in a residential area in a Tel Aviv suburb called Ramat Gan, bringing Israel's death toll to 10, according to Israel's emergency service.

Early Saturday, an infant was the lone survivor in a house that was hit and destroyed in an Israeli air strike hit in the al-Shati refugee camp, killing 10 members of the infant's family -- including eight children, according to the Palestinian News Agency WAFA. At least 20 other Palestinians were wounded after several nearby houses were damaged in the Israeli airstrike, it added.

The Israel Defense Forces (IDF) said its forces struck several positions in Gaza late Friday, including a military intelligence site. "Hamas is paying the price for its terror," it said in a Twitter post on Saturday.

Militants in Gaza responded to the airstrikes on the refugee camp on Saturday with rockets targeting the Israeli cities of Beersheba, Ashdod, and Sderot. The IDF posted a video on Twitter of a blazing fire in Ashdod, warning that the move "won't go unanswered."

On the Jala'a building strike, the Israeli Airforce said Saturday that fighter jets targeted a building which was housing Hamas military intelligence assets and using media outlets as "shields."

The Palestinian Health Ministry in Gaza, however has accused the IDF of "direct targeting of crowded civilian areas" and failing to take precautionary measures to spare civilian lives.

In a statement Saturday, the Associated Press said that the news agency does not have any "indication Hamas was in the building or active in the building" where its bureau in Gaza was located.

The Foreign Press Association and the Committee to Protect Journalists on Saturday condemned the Israeli strike on a Gaza building housing media outlets, including Al Jazeera and the Associated Press.

"It is utterly unacceptable for Israel to bomb and destroy the offices of media outlets and endanger the lives of journalists. Israeli authorities know where media outlets are housed," the CPJ said on Twitter.

CPJ Executive Director Joel Simon, said in a statement: "We demand that the Israeli government provide a detailed and documented justification for this military attack on a civilian facility given the possible violation of international humanitarian law."

By Saturday, at least 139 people had been killed in Gaza, including at least 39 children, the Palestinian Health Ministry reported, with the number of injured Palestinians in Gaza rising to at least 1,000 people. At least 254 of the injured are children who have sustained injuries as a result of Israeli airstrikes, it said on Friday.

The United Nations Children's Emergency Fund (UNICEF), said in a statement on Saturday that "children are bearing the brunt of this escalation" in violence between Israel and the Palestinians.

Chaiban said eight Palestinian children were reported killed north of Gaza overnight. They ranged in age from six months to 17 years, with more than half under 10 years old, he said.

"In Israel, two children, including a six-year-old, were killed since the escalation began," he said.

Ashraf al-Qudra, the spokesman for Gaza health ministry, urged "the international community of the necessity to curb the Israeli aggression on the Gaza Strip," adding that "we monitor these violations against Palestinian families, and this is a blatant violation."

US President Joe Biden on Saturday spoke with Prime Minister Benjamin Netanyahu. Biden "raised concerns about the safety and security of journalists and reinforced the need to ensure their protection" according to a readout of the call released by the White House.

While President Biden again "reaffirmed his strong support for Israel's right to defend itself against rocket attacks from Hamas," he also expressed his concern for the Palestinian people.

A readout of the call from Netanyahu's office said the prime minister "updated the President on developments and action that Israel has taken and still intends to carry out" and thanked Biden "for the unwavering support of USA in our right to defend ourselves."

Netanyahu said that "Israel does all it can to avoid hitting innocent parties," adding that "the proof of which is that innocent parties are evacuated from high-rise buildings where there is a terrorist target attacked by IDF."

In a readout after a phone call with Biden, Abbas called on the American President to intervene in putting an end to "Israeli attack on Palestinian people everywhere," an official statement by the Palestinian Authority said on Saturday.

President Abbas also said that he is ready to work with the American administration to "strengthen bilateral relations and remove any obstacles standing in their way."

The Palestinian statement said that "President Biden stressed the commitment of the United States to the two-state solution, and the importance of giving hope to the Palestinian people to achieve peace."

Defense Minister Benny Gantz said in a tweet on Saturday that "Israel has no interest in escalation, but is ready for any scenario."

"We have charged a very heavy price from Hamas in the last day -- and we have more plans in line," he added.

Posting a photo of him speaking to Israeli commanders, Gantz warned that "if terrorism raises its head -- we will lower it."

The Biden administration, which has said its focus is on de-escalation and working with allies in the region on that goal, sent US Deputy Assistant Secretary of State for Israel and Palestinian Affairs Hady Amr to Israel on Friday. The US Embassy in Jerusalem said in a post on Twitter that Amr's trip would "reinforce the need to work toward a sustainable calm, recognizing Israel's right to self-defense. Israelis and Palestinians deserve equal measures of freedom, security, dignity and prosperity."

An Israeli military official said on Friday that Israel is prepared to continue hitting "quality targets" for an "extended period of time." Approximately 2,300 rockets have been fired from Gaza towards Israel, of which approximately 380 failed launches fell in Gaza, the IDF said on Saturday, adding that their Iron Dome Aerial Defense System has intercepted approximately 1,000 rockets.

Following the strike on the Jala'a building Saturday, the Al-Qassam Brigades spokesperson said: "After the strike on the civilian tower in Gaza, the residents of Tel Aviv and central Israel should be prepared for our quaking response."

And that violence has boiled over to the occupied West Bank, where on Friday, at least 10 Palestinians were killed by Israeli forces during violent clashes in towns and cities across the territory, according to the Gaza-based Palestinian Health Ministry.

The violence there marks the largest number of people killed in a single day in the West Bank in years. The Palestinian Red Crescent said Palestinians in the West Bank had been targeted with live ammunition, as well as rubber bullets and teargas. According to the Palestinian Health Ministry, the majority of those who were injured on Friday were "shot by live ammunition," saying that more than 500 Palestinians have been injured since clashes erupted earlier this week.

An IDF spokesman said in a statement live ammunition was used after "crowd dispersal means" (referring to tear gas and rubber-coated bullets) had failed to stop the unrest.

The recent conflict began at the start of the week, fueled by controversy over planned evictions of Palestinian families in East Jerusalem and restrictions at a popular meeting point near the Old City. It has since escalated rapidly into one of the worst rounds of violence the area has seen since the 2014 Gaza War, which saw more than 2,200 Gazans killed during the fighting, approximately half of them civilians, including more than 550 children, according to a United Nations report.

Rioting and violent clashes between Arab and Jewish citizens swept across several Israeli cities the week, including Lod, Bat Yam and Acre, leading Netanyahu to warn against "lynching" by either community.

Punctuating the escalating conflict is the fear that the violence could spill out past borders under Israel's control as Palestinians across the region will mark al-Nakba, or, "the catastrophe" on Saturday. The annual commemoration marks the day that more than 700,000 Palestinians were driven from or left their homes during the 1948-1949 Arab-Israeli war.

In Lebanon, Nakba day demonstrations at the southern border with Israel on Saturday afternoon got tense after young people protesting in solidarity with Palestinians charged the border wall before the demonstration began. The Lebanese Army urged protesters to go back, warning that they were "going to shoot." The scenes were unfolding just a day after a Lebanese man died of shrapnel wounds he sustained from IDF rockets launched at people protesting in solidarity with Palestinians at the same border, according to the Lebanese National News agency, NNA. Israel Defense Forces said in a Friday statement that tanks fired at protesters who crossed into Israeli territory, sabotaging the border fence and setting off fires.

And in Jordan over the past few days, protesters have also been marching against Israeli strikes in Gaza, with people protesting at the Jordan-Israel border for a second day in a row in solidarity with Palestinians. Demonstrators on Saturday called on the Jordanian monarch to open the borders so they can go "fight with their brothers."