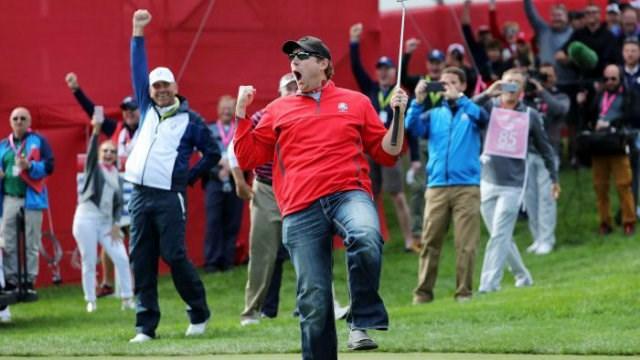 (CNN) -- It was a knee-knocking, pressure putt to rival any seen on the PGA Tour.

No, there wasn't a major championship on the line, nor a seven-figure payout. But when David Johnson stood over the dimpled white ball weighing less than two ounces, he knew his short game was being called upon to answer for his big mouth.

Just moments earlier, Johnson loitered behind the ropes during a Ryder Cup practice session on Thursday, taunting a few of the world's best golfers as they failed to solve putts of their own.

Johnson, a fan from North Dakota visiting Minnesota's Hazeltine National Golf Club, maintained that he could bury the shot that was baffling the likes of Rory McIlroy and Andy Sullivan. So reigning British Open champion Henrik Stenson called him on it, pulling him onto the green, and offering him the chance to try his own luck.

As he lined it up, dressed in blue jeans and sneakers, Europe's Justin Rose added to the anxiety, placing a $100 bill alongside the ball.

"I was told by Rory and Henrik that it was probably the worst read I could hit," Johnson told CNN's Poppy Harlow during Friday's appearance on "CNN Newsroom."

Bad read not withstanding, Johnson stepped up and did what the world's best seemingly couldn't: drained the 12-footer.

"It was wild," Johnson revealed to Harlow. "It was just a cool moment."

Despite having been the subject of the amateur's taunting, the European pros were good sports throughout, mock falling to the ground as Johnson's putt dropped.

After a round of high fives, and with the crowd still abuzz, Johnson sought out Rose, asking the 20-time tournament winner to autograph the freshly acquired C-note.

The note "has been signed and stored away safely," said Johnson.

And for the time being, it seems the guest's heckling days are on hiatus.

"You know, I think I'm best just to enjoy some golf," Johnson smiled.