IU student on flight shot down in Ukraine 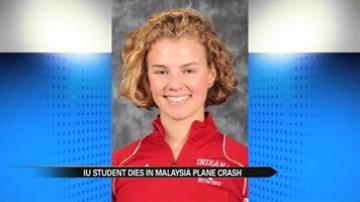 She was one of 298 people killed when the flight was shot down over the Ukraine.

Keijzer was a doctoral student in chemistry at IU's Bloomington campus.

She was recruited to the school’s rowing team four years ago from Holland.

Her former coach said she was a joy to have on his team.

Keijzer loved the United States so much that even after her eligibility to row ended, she decided to stay in Bloomington and continue her education.

This summer she and her boyfriend decided to take a vacation to Indonesia where they planned to meet up with a former IU student.

But they never made it.

“It’s hard to fathom. It really takes you by surprise and it’s shocking,” Peterson said.

He said it just doesn’t make sense that someone with so much going for them is now gone.

“Phenomenal person and she had everything in front of her as far as life. It’s just sad,” Peterson said.

Peterson said Keijzer's parents shared on Facebook that they received confirmation from Malaysian Airlines that she was one of the passengers on flight 17.

It states Keijzer earned her master's degree from IU in 2011.

"On behalf of the entire Indiana University community, I want to express my deepest sympathies to Karlijn's family and friends over her tragic death," Indiana University President Michael A. McRobbie said. "Karlijn was an outstanding student and a talented athlete, and her passing is a loss to the campus and the university. Our hearts also go out to the families of all the victims of this senseless act."