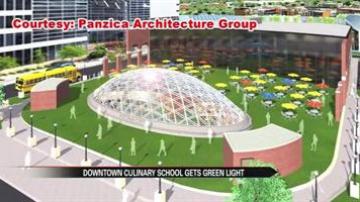 SOUTH BEND, Ind. -- The city of South Bend agreed to take the former College Football Hall of Fame off the market for six months so Ivy Tech can come up with a plan to transform it into a culinary school. Students are excited at the prospect of moving and expanding the school.

Peeling, chopping and zesting are just a few of the daily assignments inside Ivy Tech's culinary school.

But the space isn't as plentiful as the food.

Space is abundant at the site of the former College Football Hall of Fame.

South Bend's redevelopment committee unanimously voted in favor of taking the property off the market.

Now Ivy Tech has six months to come up with a plan and decide how the space can be transformed into a bustling culinary school.

"Nothing is going to help our town more than something we don't have," said Rachel Van Vynckt, Ivy Tech culinary school student.

Van Vynckt is thinks this opportunity is the best one yet.

"By Ivy Tech occupying this space here, they're giving a whole new aspect of what are we going to teach our future culinarians," said Van Vynckt.

Right now she's learning the basics and has enjoyed her experience so far.

But she can barely contain her enthusiasm for the possibility of the program's expansion.

"To have the space would just be amazing all around for future farmers and extra classes maybe in the future for the rest of South Bend and you know to have a greenhouse in there," said Van Vynckt.

To make these dreams a reality, the chancellor of Ivy Tech says these next 6 months will be a lot of work.

"We've begun a process of engaging a consultant to help us organize this process, we'll be interviewing key community leaders, citizens of interest and that can give us the kind of perspective to say whether this is a go once we get beyond the excitement," said Thomas Coley, Chancellor of the Northwest-North Central Regions of Ivy Tech.