Jack Russell Terrier drags himself to safety after hit and run 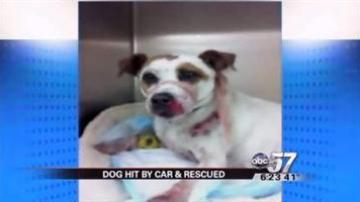 DETROIT -- Who says cats are the only ones with nine lives?

Check this out! A Jack Russell Terrier managed to drag itself to safety after it got hit by a car!

Rhonda Shay was driging along 8 Mile Road in Detroit this week when she saw a puppy get hit.

The driver took off, leaving Wilson for dead.

"A couple flips on the ground and then it was crying and then it got up and it just dragged its way across the way," said Shay. "I mean he's a mess and he's going to be okay; he's gonna live."

Wilson was treated for a broken jaw, a broken leg, and several cuts.