January 2013: Colder than last year, but still above normal. 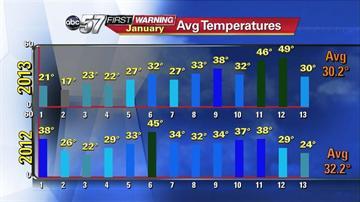 Comparing average temperatures* so far, January 2013 has some similarities with 2012. The key difference was a colder start to the month.

Bottom line, looks like 2013 will start out above average, as it did last year, only drier! ( more on that in later blogs)