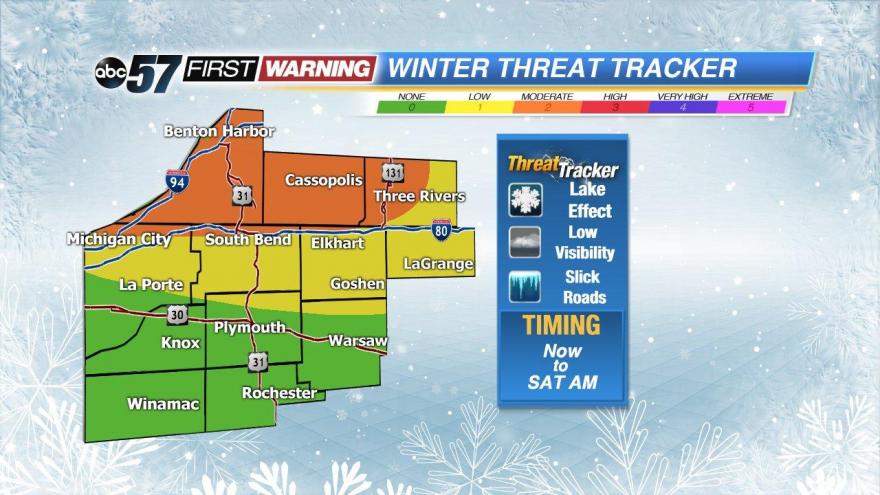 UPDATE THUR JAN 5: Lake effect snow continues, mostly north of US-20. Impacts from the amount of snow will be minimal as the forecast 1"-3" has not changed. The bitter cold, temperatures in the teens and single digits does allow every flake to stick, causing slick roads. The light snow continues through Friday into Saturday. Drivers should use the greatest caution north of US-20.

UPDATE WED JAN 4: The cold remains the major headline through the end of the week. Highs will only be in the teen, lows in the single digits and a wind chill near zero or colder. Lake effect snow will increase Thursday and last through Friday. The snow is not expected to be extremely heaving but it will be steady, gradual accumulation for 1"-3" likely, with higher amounts north. The greatest concern for travel would be driving north on I-196 through west Michigan.

Temperatures tumble to end the week, highs only in the twenties and teens through the weekend. The cold will be the biggest impact but there's also another bout of lake effect snow in the forecast.

Temperatures fall to 20 Wednesday morning, and there's really no warm-up, temperatures slide into the teen by the afternoon. The wind chill Wednesday will be near zero with a west wind in excess of 20 mph. Temperatures will stay in the teens (or colder) through Friday. With the drop in temperature, lake effect snow returns to the forecast. Wednesday, only flurries are likely, in part thanks to the gusty wind limiting any major band development. Light snow develops Thursday and continues into Friday. The snow isn't expected to pile up but accumulate gradually. Official forecast puts at least 1" of snow north of US-20 with up to 3" or snow possible in areas shaded light blue. There could be localized higher amounts of more than 3" but not particularly widespread.