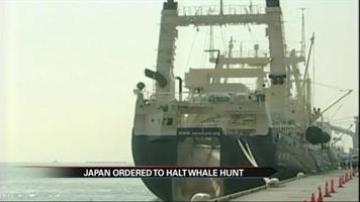 SHIMONOSEKI, Japan -- Japan can no longer continue its annual whale hunt in the Southern Ocean.

The United Nation's International Court of Justice made the ruling Monday rejecting the country's argument that its whaling was only for scientific research.

Every year until now Japan's whaling fleet carried on with the hunt despite a worldwide moratorium, because of a loophole that allowed for research.

The Australian government challenged the Japanese whaling program in the International Court of Justice, leading to Monday's ruling.