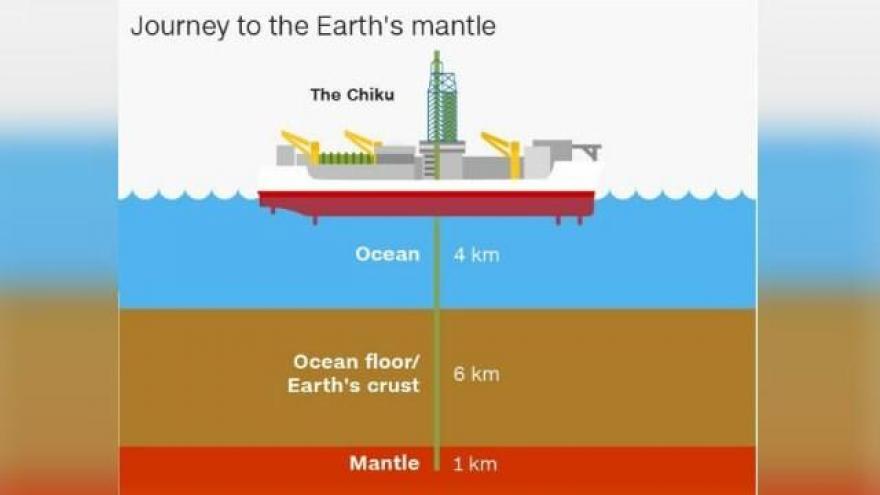 (CNN) -- Humans have been to the Moon and explored almost every corner of the planet -- but there's one place they have never been.

A group of Japanese scientists said they plan to be the first group to successfully drill into the Earth's mantle, the planet's vast molten-rock interior, which lies just beneath the outer crust.

Researchers at Japan's Agency for Marine-Earth Science and Technology (JAMSTEC) say they are hoping to discover more about how our planet was formed and what the mantle is composed of. Japanese media first reported on the project earlier this week.

The mantle makes up more than 80% of the entire Earth's mass, lying six miles (10 kilometers) beneath the ocean floor.

"We don't know the exact (composition) of the mantle yet. We have only seen some mantle materials -- the rock is very beautiful, it's kind of a yellowish green," researcher Natsue Abe, who works for JAMSTEC, said.

The Japanese government, which is helping fund the expedition, hopes the research could help discover ways to better predict earthquakes, Abe said.

"In Japan we have some volcanoes, earthquakes and such kind of natural hazards. People (want to create) some monitoring or analysis equipment but we don't know ... what kind of factor to use," Abe said.

"So we need to know the natural system more clearly or precisely ... we have to observe the earth more precisely."

Journey to the mantle

Three drilling sites are currently under consideration, Abe said, all of them in the Pacific Ocean.

"One is off Hawaii -- we're going to survey there -- another one is off Costa Rica, (and) the last one is off Mexico," she said.

To access the mantle, JAMSTEC wants to use one of the most advanced drilling vessels currently available, the Chikyu.

"It's the biggest drilling ship of our science area, so the drilling capability is three times longer, or deeper, than the previous (vessels)," Abe said.

The researcher said the Chikyu's drill will drop down through almost 2.5 miles (4 kilometers) of ocean before reaching the ocean floor.

It will then bore through 3.7 miles (6 kilometers) of the sea floor, or the planet's crust, before it reaches the mantle.

Drilling will start by 2030 at the latest, according to Abe.

Their project has four primary objectives, only the first of which is to access the planet's mantle by drilling through the sea floor.

The final objective is to further examine how deep microbial life exists inside the planet. "(What is) the limit of the life inside the Earth?" Abe said.

Before any drilling can begin, there's more research that needs to be done to build the right technology, Abe said, but she was convinced the project was "feasible."

"If we dig into the mantle we will know the whole Earth history, that's our motivation to search," she said.