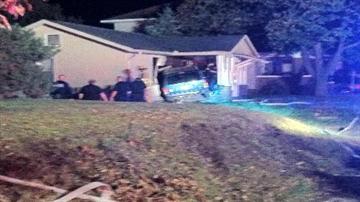 MISHAWAKA, Ind. -- A jeep crashed into a Mishawaka family's home and the driver fled the scene.

It happened just before 12:30 a.m. Friday on the 700-block of Logan Street. According to officers, the crash happened because of an argument that a man and a woman were having in the car.

Sometime during that argument, the woman lost control of the Jeep and went airborne into the house.

Police said both are lucky to be alive.

A mother and son were inside the home when the accident occurred. They were both unharmed. Three cats did go missing following the crash, one was found.

Officers are still looking for the man that was riding in the Jeep. The female driver was taken into police custody.