Jenner asks the world to "Call Me Caitlyn" 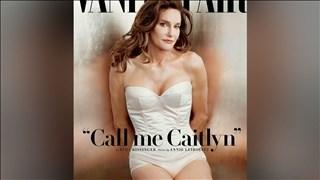 Five minutes after Vanity Fair released the cover of the July edition, Caitlyn Jenner shot to the top of Twitter's trending hashtags.

The cover model, formerly known as Bruce Jenner, is now seen in a behind-the-scenes video from the Vanity Fair shoot on YouTube wearing make-up and long hair, two months after an exclusive interview with Diane Sawyer.

Caitlyn too to Twitter, saying, “I'm so happy after such a long struggle to be living my true self. Welcome to the world Caitlyn. Can't wait for you to get to know her/me.”

For decades, the world knew Bruce Jenner as an Olympic gold medal decathlete and father on E!'s “Keeping up with the Kardashians.”

With the new Vanity Fair photo shoot video and new identity, “Bruce” seems to have vanished.

“This magazine cover will go down in history as one of the most iconic covers we'll see in our lifetime. I think it will be difficult to find a copy on your magazine stand,” says ABC News Digital Entertainment Editor Lesley Messer.

E! says it has been following Jenner's transformation and plans on releasing a television series this summer.