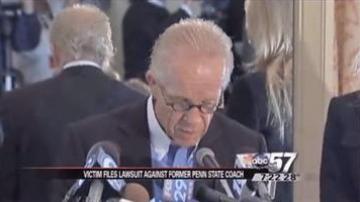 The man is not one of the eight boys that Sandusky is charged with molesting.

“I am hurting and have been for a long time because of what happened but feel now even more tormented,” said Attorney Jeff Anderson reading the victim’s statement.

The man says Sandusky threatened to hurt him or his family if he told anyone about the abuse. Penn State University and the Second Mile Foundation, Sandusky's charity for at-risk boys, are also named in the suit.