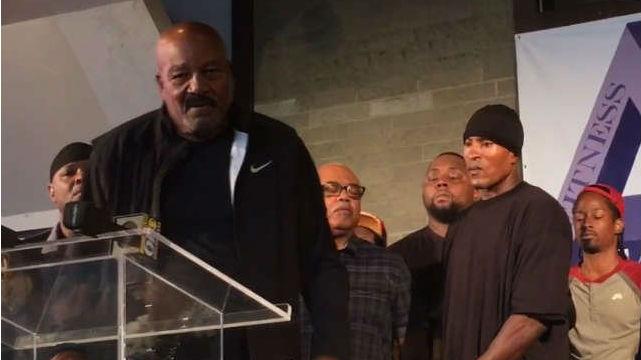 Cleveland - A coalition of former gang members, clergy, and those connected to some of Cleveland's most dangerous streets called on football legend Jim Brown Sunday, in an effort to end gun violence.

A little more than a dozen people gathered on the stage on Mt Sinai Baptist Church in Cleveland to address the media and the community.

Almost every person there said they knew someone whose life taken by a bullet.

"I'm 26 years old. I been in the streets, been shot, stabbed and all that. We're reaching out to Jim Brown and whoever else gonna listen to us to come help us do what everybody else is afraid of to do," said one speaker.

The football legend came to answer that call.

"They will have all of my support. My financial support, my mind, I don't have too much left physically but I will be there physically," Brown said.

Brown said their coalition will serve as foot soldiers in a grassroots effort to create jobs and provide education in communities plagued by gun violence.

In July Cleveland police say there have been at least 87 shootings.

And who better to save those streets, than those who know them best.

"These young people may look kind of ordinary to you, or just like regular folks but believe me when it comes to the problem we're facing they are champions," said Brown.

The group says their first step is getting financial support for their efforts. They're encouraging anyone who wants to help in to get involved. For more information contact Reverend Jimmy Gates at 216.225.7582