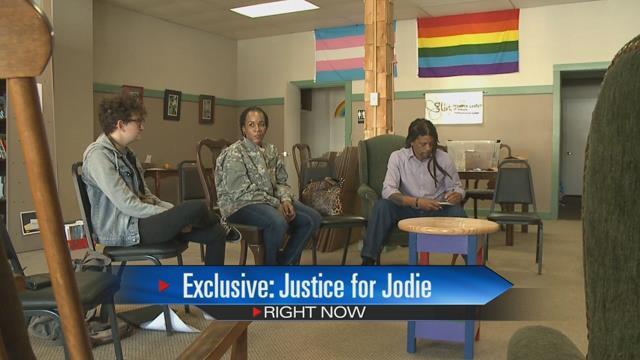 A South Bend family continues their fight to get Justice for Jodi.

Local leaders are joining the family of slain veteran Jodi Henderson as they work to get state legislators to pass a hate crime law in his name.

Their goal is to turn tragedy into a triumph for LGBT rights in Indiana.

“He shouldn’t have been taken away, especially not in a hatred kind of way,” said Donna Forrest, Jodi Henderson’s aunt.

Losing a nephew for Donna, a son for Patricia, and a member of Eli of the GLBT center’s community was enough to bring them all together.

A promise on behalf of an advocacy center, to make sure no other family has to go through what Jodi Henderson’s family is going through now.

“This is not only for my son, it’s for their lives too,” said Patricia Forrest, Jodi Henderson’s Mother.

Leaders throughout the community are calling Henderson’s death a hate crime.

But leaders in Indianapolis still refuse to recognize bias crimes in the state.

So this group plans to lobby for change.

“We see this as a long haul, this could be years and I’m really just encouraging everyone that we all need to practice self care but we also need to take care of each other,” said Williams.

But they also know change will have to start closer to home.

While they work to educate their own communities, they also hope their voices will be heard at the statehouse.

They’re just trying to put a face, Jodi’s face, on a hate crime bill that failed to pass this last legislative session.