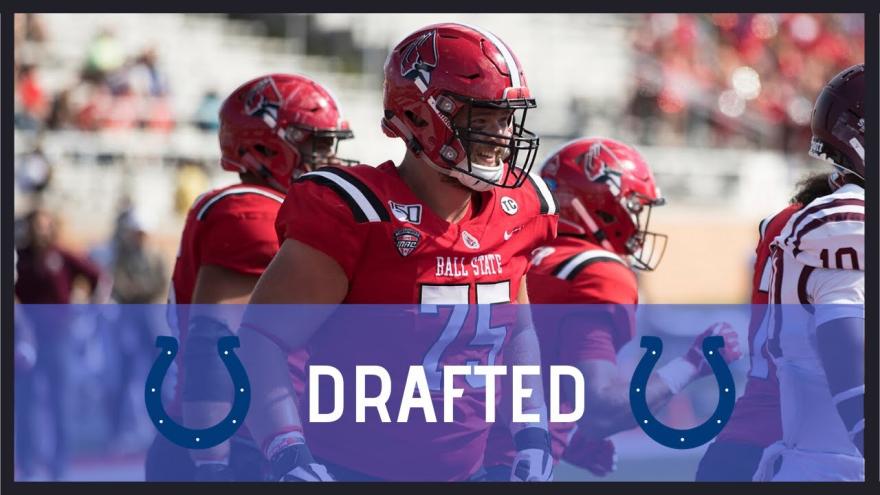 SOUTH BEND, Ind. --- John Adams High School graduate Danny Pinter has been drafted in the fifth round by the Indianapolis Colts with the 149th pick in the 2020 NFL Draft.

Pinter began his collegiate career as a tight-end for Ball State and eventually went on to play as a right tackle, earning the First-Team All-Mid-American Conference selection in 2019, as well as the Cardinals' Most Outstanding Player.

At John Adams High school the South Bend native helped lead the team to an 18-14 record in his career, including the school’s winningest season in more than 50 years his sophomore year.

Pinter is the first John Adams High School graduate to go on to the NFL since Anthony Johnson in 1990.

What does it mean to you to stay in Indiana?
“Man, so much. I really can’t even put it into words to be honest. I mean this state means a lot to me. I’ve lived here my whole life, I have played football here my whole life. So to have the opportunity to stay here and stay around a bunch of people who helped me get to his point is – really, I can’t put it into words. I mean I am so excited.”

Where did you expect to go today and how much contact did you have with the Colts through this process?
“Heading into it, we kind of knew it was a toss-up. That is just kind of the way it works. I’ve been told like three-to-five. That’s not something I was too caught up on. I just wanted the opportunity. In terms of talking to them, I talked to the Colts at the NFLPA game, at the combine and then didn’t actually have any over-the-phone interviews after the combine, but stayed in touch with some scouts – that sort of thing.”

With coming to a team like the Colts with such an established offensive line, is that a plus or a minus? How do you look at that situation?
“I view it as a plus. There are great players there and I think everyone knows that. So I’m just coming in ready to learn as much as I can. I mean obviously I am a competitive person so I am going to go out there and compete as much as I can, but at the same time there is a lot to learn from those guys with a lot of experience. So that is what I am really looking forward to – is just becoming a better player through them.”

As a guard would you better yourself after Quenton Nelson? Is that sort of the prototype?
“Yeah, I mean he is the best in the business. I mean I think that is known across the league. He is the best in the game at the position so to have the chance to learn from him is something that I’m really looking forward to.”

What went into the change of you going from tight end to tackle?
“It was a mix of things. I was a bigger tight end, but at the same time the team needed a tackle so my coach just approached me at the time and asked if that was a move I was willing to make for the team and it was something I embraced right from the first time they asked me.”

Do you think that position change maybe helped you get to the NFL?
“I do, yeah definitely. It’s certainly it’s been my goal no matter where that was going to be, but I think it is the most natural fit for me. I mean I love offensive line, it fits me well and it definitely helped me get to his point.”

When you talked to the Colts did they talk about the ability to move all around the offensive line?
“Yeah, that’s kind of been something I have really been working on because throughout this process was kind of recognized to me that that was probably the reality. I’ve been open about how willing I am to play wherever a team needs me. So I have really been trying to work on my versatility – working as a center, working as a guard and then working as a tackle if I need to go do that. So I am more than willing to do whatever they need me to do.”

So you were a right tackle your last two years at Ball State?
“Yeah.”

Did you practice at all in the interior there or if you do that in the NFL it will be your first time?
“So it was a mix. So not in games or practices much or anything like that, but I was staying after practice since this summer because I knew this was a possible switch and then just be willing to do it if the team needed it or someone got hurt. Then also at the NFLPA game I played at, I played guard there the whole week. It’s something I definitely feel comfortable with.”

Do you have any connections to the Colts with growing up in Indiana?
“Yeah, (being) from Indiana, it is Colts country. So I saw plenty of games growing up. I know how great of a fan base it is. I’ve been to games, I’ve been to Lucas Oil (Stadium) so it is definitely a culture that I am really excited to be a part of.”

What are your thoughts on Quenton Nelson?
“He is the best in the game at the position without a doubt. That’s well established. I love watching him – I mean before obviously playing for the Colts now. So I am really excited to learn from him.”