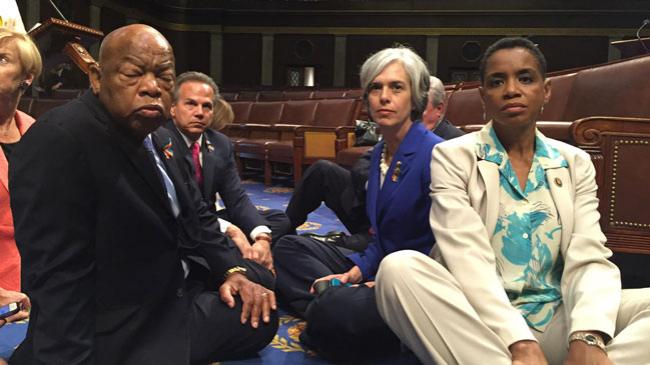 WASHINGTON (CNN) -- Georgia Rep. John Lewis, a congressman known for historic contribution to the civil rights movement, is leading a sit-in on the House floor Wednesday to push Republicans to address gun violence.

The group the chanted from the floor: "I'm sick and tired of being sick and tired!" and "No bill, no break!" while the House remained in recess as of 1 p.m. ET.

Lewis wrote a letter to House Speaker Paul Ryan demanding that he keep the House in session through its planned recess to debate and vote on gun control legislation. The move was the latest in a long string of failed attempts at enacting tighter curbs on firearms in the United States.

"As the worst mass shooting in our nation's history has underscored, our country cannot afford to stand by while this Congress continues to be paralyzed by politics," the Georgia Democrat wrote.

Ryan said, "the House cannot operate without members following the rules of the institution, so the House has recessed subject to the call of the chair."

And former President Bill Clinton tweeted his encouragement, writing, "This is leadership" and linking to Lewis' tweet about the sit-in.

Ohio Rep. Joyce Beatty, who exited the chamber briefly, told CNN that Democrats planned to stay "as long as we need to -- all day, all night."

A lifelong activist for civil rights, Lewis was beaten more than 50 years ago so badly by Alabama state troopers that they fractured his skull.

The then-25 year old and hundreds of peaceful protesters were marching for voting rights across the Edmund Pettus Bridge when the troopers and a posse led by the sheriff attacked the activist. That day -- March 7, 1965 -- became known as Bloody Sunday.

Dozens of House Democrats joined the sit-in in the well of the House reading names of gun victims to visitors in the House galleries.

Senators failed to gather enough bipartisan support to pass a series of gun control measures Monday. Following the worst mass shooting in U.S. history, senators from each party introduced the measures they said would have strengthened background checks and prevented suspected terrorists from obtaining weapons, but failed to cross the 60-vote threshold needed to advance.

Lawmakers and their aides tweeted from the House floor:

CNN's Tom LoBianco and Manu Raju contributed to this report.