Joplin holds moment of silence for one-year anniversary of tornado 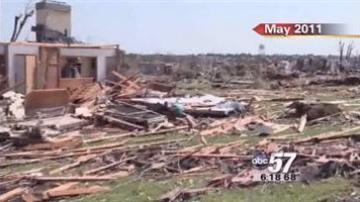 JOPLIN, Mo. -- One year ago, it looked like a bomb had dropped on Joplin, Mo.

161 people were killed, and more than 8,000 homes and businesses were destroyed when a monster E-F 5 tornado tore through the city.

The storm caused more than $2.8 billion in damage.

But what difference a year makes.

Thousands of volunteers have cleared entire neighborhoods of debris and are now rebuilding.

"We were able to realize that no matter what the building was like, you know, it was the people that mattered, and that was really a great thing," said Danielle Campbell, a graduating senior.

At 5:41 p.m. on Tuesday, the City of Joplin held a moment of silence to mark the exact time the twister roared through.