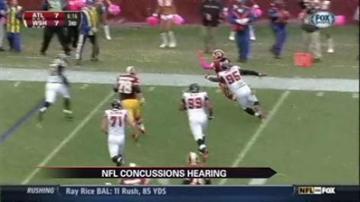 A judge heard arguments to determine whether the NFL can be sued for head injuries.

More than 43,000 players are fighting for a chance to have their case heard by a jury.

The NFL says players agree to settle matters through arbitration as part of their contracts but the players say they deserve to be heard.

"Our position is the league knew or should have known that these repeated blows to the head would cause significant neurological injury," said a players' attorney.

"We strongly deny those allegations that we withheld any information or misled the players," said a NFL attorney.

The judge's ruling could take several months and will likely be appealed.