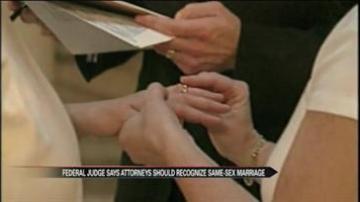 A federal judge say attorneys defending Indiana's Gay marriage ban have not done a good enough job arguing that one lesbian couple should not be legally married.

One of the women in the relationship has a terminal illness.

The judge granted the couple a temporary restraining order protecting them from the state's gay marriage ban.

The judge granted their request because he says they are likely to succeed in their bid to have the ban overturned and declared unconstitutional.