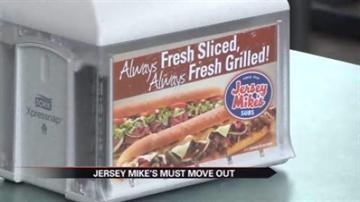 SOUTH BEND, Ind. -- A South Bend business is getting the boot.

Wednesday a judge ruled that the Jersey Mike's sandwich shop must move out of the now empty College Football Hall of Fame building.

In December, the city told the owner he would have to leave when the Football Hall of Fame did, despite having a lease through 2015.

Jersey Mike's has been serving sandwiches at its location inside the Hall of Fame for 12 years.

However on Wednesday, a judge ruled that owner Bob Guros has one week to get out of the now vacant building.

"Disappointing, we have a lot of loyal customers who will be disappointed I think and I guess I am going to have to go out find a job," said Guros. "I'm 75-years-old and this is my only source of income right now."

In August the City of South Bend fist notified Guros that since the Hall of Fame was leaving it did not have to honor his lease, which runs through 2015.

For that reason, Guros says, the city gave him until December to move. So, he tried fighting it in court.

"We filed for a declaratory judgment and we got a decision yesterday and sadly it was not in our favor," said Guros.

Now the future of the business is up in the air. Guros says he does not know if he can afford to relocate after investing thousands of dollars into his current location.

But that is not the only hurdle Guros faces right now.

"It's going to be very difficult. I am going to have to put in a lot of hours and come in over the weekend and start packing things up," said Guros. "The big job of course will be removing  all of the big equipment."

Guros says he is working with his lawyer to see what his options are, but as it stands now he and his four employees will be jobless by next Thursday, when the shop closes its doors for good.