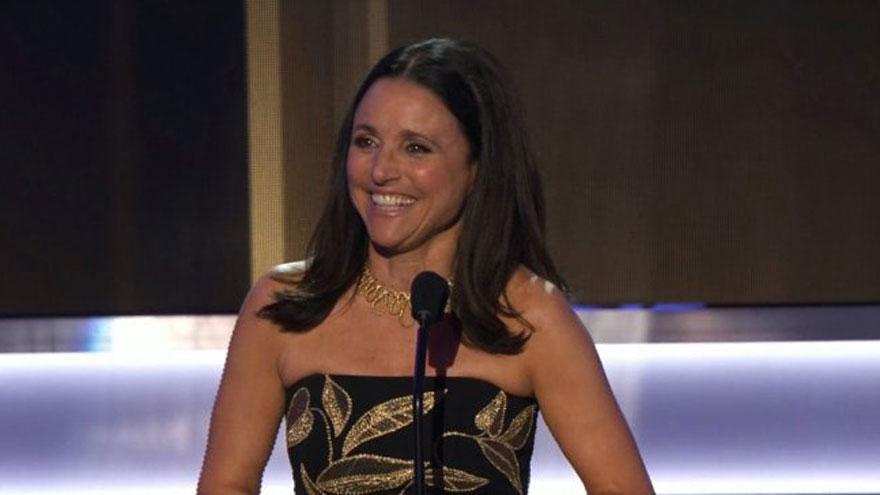 "1 in 8 women get breast cancer. Today, I'm the one," Louis-Dreyfus wrote.

The 56-year-old actress went on to say "The good news is that I have the most glorious group of supportive and caring family and friends, and fantastic insurance through my union."

"The bad news is that not all women are so lucky, so let's fight all cancers and make universal healthcare a reality," she concluded.

Hollywood quickly rallied around her.

"We love this woman," Hale wrote in a caption.

Other stars, including Rosie O'Donnell and Christina Applegate, as well as fans offered their well wishes.

The news comes on the heels of what has been a triumphant year for Louis-Dreyfus.

She broke the record for the most Emmys won by a performer for a single role earlier this month, after snagging her sixth consecutive win for lead actress in a comedy for her work on HBO's "Veep."

It was her seventh statue in that category overall as she had previously won in 2006 for "The New Adventures of Old Christine."

HBO told CNN that Louis-Dreyfus received her diagnosis the day after her historic Emmy win. Her health did not factor into the decision to end "Veep" with Season 7, which writers are currently working on. HBO added the show's production schedule will be adjusted if needed to accommodate its star.

"Our love and support go out to Julia and her family at this time," HBO said in a statement. "We have every confidence she will get through this with her usual tenacity and undaunted spirit, and look forward to her return to health and to HBO for the final season of 'Veep.'" (HBO and CNN share parent company Time Warner.)

Louis-Dreyfus has advocated for cancer research in the past by teaming up with the Livestrong Foundation, according to Web MD.

"I was asked, and it was a no-brainer," she told the site.

The former "Seinfeld" star is also a long-time advocate of environmental causes and green living, leading to a Mediaplanet feature on her work.

"My actions have an impact on humanity and generations to come," she told the publication.