Jurors hear details of how couple was murdered 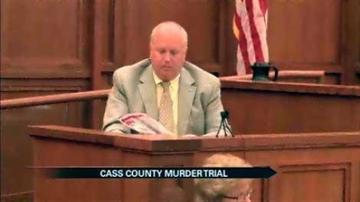 CASS COUNTY, Mich. -- Jurors heard testimony from a forensic pathologist Wednesday on the third day of testimony in the double murder trial of Keith Lintz. He is charged with the murders of John and Carolyn Tarwacki in February 2010.

Prosecutor Doug Baker hypothesized that Keith Lintz shot John Tarwacki in the face, then in the chest before turning the gun on Carolyn Tarwacki. She was shot once in the arm and once in the back.

Baker then described how Carolyn was beaten, then stabbed five times in the chest.

John was then stabbed ten times in the back.

"The findings I identified at autopsy, there would be no inconsistencies with that scenario; that's correct," said Forensic Pathologist Dr. David Stark.

Dr Stark was shown what prosecutors believe is the murder weapon.

"Is that consistent with the weapon that would have been used on John Tarwacki?" said Baker.

"Can you form a medical opinion of whether he was alive at the time when those stab wounds were being inflicted?" asked Baker.

"Yes. He was alive at the time the stab wounds occurred," said Stark.

After Dr. Stark, Patricia Wilds took the stand. She testified Lintz showed up at her home in the middle of the night freaking out.

"He just kept saying, you know, they're going to get him; they were going to catch him; and he should have wiped the footprints. He just kept repeating it," said Wilds.

Then, she testified he said something else.

"What did he say?" asked Baker.

"That you don't bring a knife to a gun fight," said Wilds.

The judge would not allow the media to show Patricia Wilds' face. After the last time she testified, she was assaulted and all of her front teeth were knocked out.

The Michigan State Police Sergeant who documented the murder scene also testified Wednesday. He walked the jury through the evidence he found including footprints and blood in the snow.