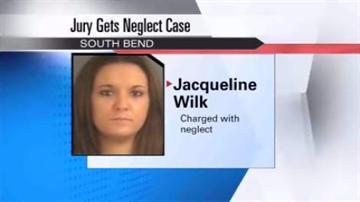 SOUTH BEND, Ind. -- Jacqueline Wilk’s fate is now in the hands of a jury. This is Wilk’s second trial on neglect charges in the deaths of her two children.

Wilk was arrested on neglect charges in the 2011 deaths of her two children who died of hyperthermia after getting locked in her car trunk.

Wilk testified in her own defense Thursday.

Every day of this trial has been emotional for the Wilk family, but it was especially hard for Jacqueline Wilk to keep her composure Thursday.

At times while she was on the stand she had to pause to bring herself back to the moment.
The defense really emphasized the idea that Wilk did not physically put her kids in the trunk or in harms way.

Before deliberations, the judge emphasized to the jury that in order for them to decide that Wilk is guilty, they have to believe that the prosecution proved without a doubt that Wilk knowingly placed Isaiah and Dominic in danger.

The jury began deliberations around 3 p.m.