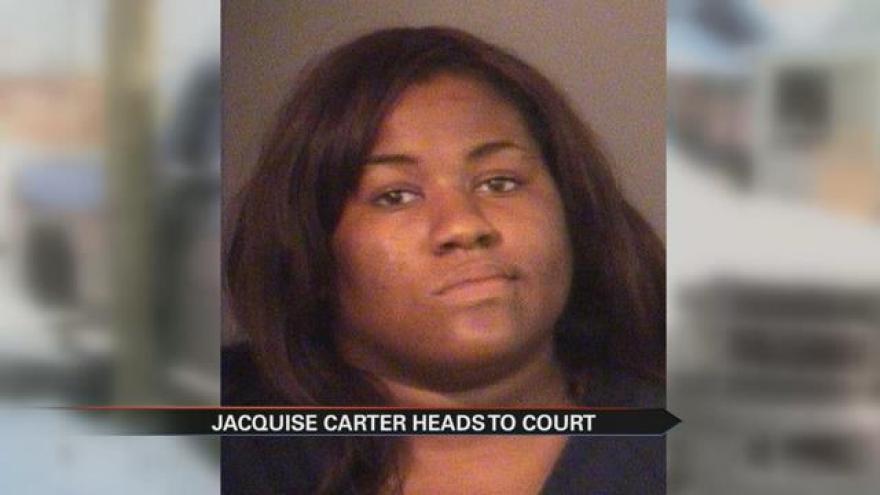 The woman facing charges for a January crash and shooting incident that injured two young teenagers is scheduled to appear in court on Monday.

Jacquise Carter is facing charges for battery and assisting a criminal.

According to court documents, four girls, ages 12-14 were at a home on Harrison Avenue when a young man told them he had a car and asked if they wanted to go for a ride.

The SUV continued following them and a man, later identified as James Carter III, hung out of the passenger side of the SUV with an AK47 and began firing at the Nissan, according to the probable cause affidavit.

The Nissan then crashed into a parked vehicle.

A woman, later identified as Jacquise Carter, then pulled the front seat passenger out of the vehicle and began to beat her, according to the probable cause affidavit.

A resident who heard the crash, came outside and told police James Carter pointed his gun at him and told him to get back inside, reports said.

James eventually admitted to police he had been at the scene where the Nissan crashed but denied firing shots.

Jacquise admitted she was driving a maroon SUV and was chasing the stolen Nissan, reports said.

James Carter’s case is also ongoing. He has been behind bars since the January incident, charged with two counts of aggravated battery causing serious, permanent disfigurement and one count of pointing a firearm. His bond was set at $150,000.

Jacquise was released on $50,000 bond. Her jury trial is set to begin November 15th.