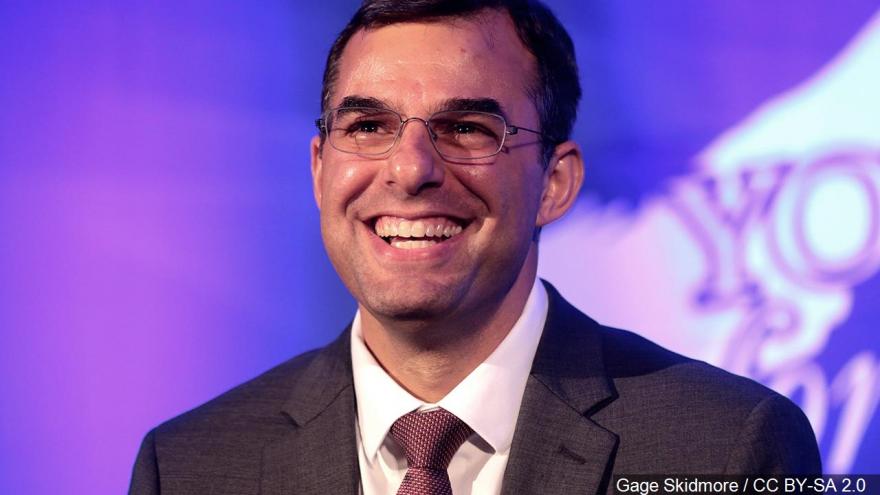 (CNN) -- Justin Amash, a Republican-turned independent congressman from Michigan, announced Tuesday night that he is launching an exploratory committee for long-shot presidential bid as a Libertarian.

Amash launched a website announcing he has formed an exploratory committee for a presidential campaign.

"Americans are ready for practical approaches based in humility and trust of the people," he said in his announcement. "We're ready for a presidency that will restore respect for our Constitution and bring people together. I'm excited and honored to be taking these first steps toward serving Americans of every background as president."

His potential entry into the race comes after more than a year of deliberation.

In recent days it became more evident that Amash was likely to launch a campaign for the presidency. Earlier this month, he said he was looking "closely" at a bid and two weeks ago he said in a statement that he stopped actively campaigning for his House seat in mid-February while he considered jumping into the presidential race.

He was facing a tough reelection in Michigan's 3rd District. National Republicans were eager to defeat him, and several Republicans have been running for the seat.

If he is to run in the general election for president, Amash will have to win the Libertarian Party's nomination at their convention in Austin, Texas, which is currently set for the end of May. That timing could change depending on the coronavirus pandemic.

While it is very unlikely a third-party candidate could win the presidency, a high-profile third-party contender has the potential to reshape the race. In 2016, Libertarian presidential nominee Gary Johnson, a former governor of New Mexico, was on the ballot in every state and won a little over 3% of the national vote.

Whether a strong Amash showing on Election Day could hurt the Republican candidate or the Democratic candidate more remains unclear.

President Donald Trump has continually earned high approval ratings among the overwhelming majority of self-identified Republicans throughout his presidency, but Amash could win support among traditionally Republican or conservative voters who are dissatisfied with Trump. He could also appeal to progressive voters who are unhappy with Joe Biden's candidacy and agree with Amash on issues like civil liberties and foreign policy.

Amash was first elected to represent Michigan's 3rd congressional district in the 2010 tea party wave. A traditional libertarian, he stood out from many of his House Republican colleagues to begin with, opposing expansive federal surveillance powers and American intervention abroad.

Over the years, Amash has been consistently willing to take controversial votes according to his view of limited government, often being one of the only House members to vote against legislation with broad bipartisan support, such as an anti-lynching bill in February.

In 2015, Amash was one of the founding members of the House Freedom Caucus, an influential group of hardline conservatives that clashed with House Republican leadership and pushed for a more open legislative process and curtailed federal spending. During Trump's first two years in office, it became clear that Amash — a vocal Trump critic — and his Freedom Caucus allies who are known today for being some of the President's most ardent supporters in Congress — had different priorities.

He made waves last May when he announced his support for impeaching Trump over the findings in former special counsel Robert Mueller's investigation into Russian interference in the 2016 election. He was the first and only House Republican to support impeachment, eventually voting for both articles of impeachment against the President as an independent late last year. In early June, not long after coming out for impeachment, he stepped down from the House Freedom Caucus and the HFC board, telling CNN at the time that he didn't want "to be a further distraction for the group."

On July 4 of last year, Amash announced he was leaving the Republican Party for good.

"The Republican Party, I believed, stood for limited government, economic freedom and individual liberty — principles that had made the American Dream possible for my family," he wrote in a Washington Post op-ed. "In recent years, though, I've become disenchanted with party politics and frightened by what I see from it. The two-party system has evolved into an existential threat to American principles and institutions."

Amash, 40, is the son of a Syrian immigrant mother and a Palestinian refugee father. Before entering Congress, he worked as a lawyer for his family's business and served a term from 2008-2010 in the Michigan state house.

In recent days, he has criticized the President's comments about federalism amid the coronavirus pandemic. On Monday, Trump said at his daily press conference when discussing states staying locked down that "when somebody's president of the United States, the authority is total, and that's the way it's got to be."

Amash has repeatedly told reporters he would only run for president if he believes there is a path to victory. In March 2019, he told CNN he never stops thinking about possibilities like running for president "because there is a big problem with the current two-party system we have, and someone has to shake it up."

"Now, is it possible for anyone to shake it up and make a difference?" he asked at the time. "I don't know."