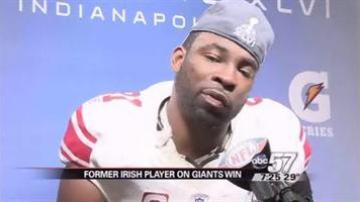 INDIANAPOLIS, Ind.-- A former Irish football player was there fighting with the Giants all the way to their Super Bowl victory.

ABC 57 caught up to Justin Tuck at Lucas Oil Stadium after the victory.

He joked that Eli Manning had stolen the M.V.P. title from him again.

Even though he had just won The Super Bowl, he did take a moment to think back to his time at Notre Dame.

He also said that the team just took the game one play at a time and were able to work out a win.