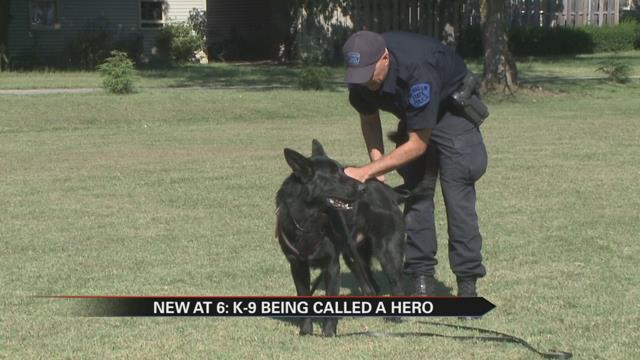 "Pitch" is making quite a name for himself. He found 3 people in 24 hours on August 11th and August 12th.

Pitch's handler said the first case was a domestic violence suspect on the run, the second was a parole absconder, and the third was a missing woman in Wayne Township.

Trooper Joel Service said, “To have two or three strung right together in a row is kind of a rarity for any handler.”

Service said Debora Reano was missing last Tuesday near Dowagiac. Pitch was sent in to find her when the helicopters came up short.

Service said, “On our third pass through the corn, Pitch took a turn to the south very abruptly and went probably 20-30 rows into the corn and I heard Debora cry out because she was surprised that all of a sudden there was a big black dog at her feet!”

Paul Miller said Reano left her assisted living facility and they were worried.

Miller said, “I don’t think she knew what was going on, she was having a bad day!”

Trooper Service said they're on call so they stay busy.

Service said, “Immediately after that we were able to track a domestic violence suspect that had run from her house after assaulting her parents, and we were able to find her and make sure she was arrested and taken to jail. Then the following day we down here in Niles tracked a parole absconder and made sure he was arrested.”

Joel Service said, “He’s about 8-years-old. He’s trained to sniff out petroleum based products at the scenes of arson, so if somebody attempts to burn down a building or burns down a building to see if there’s any residual accelerants.”

Ki is in charge of sniffing out arson in Berrien, Cass, and Van Buren counties.