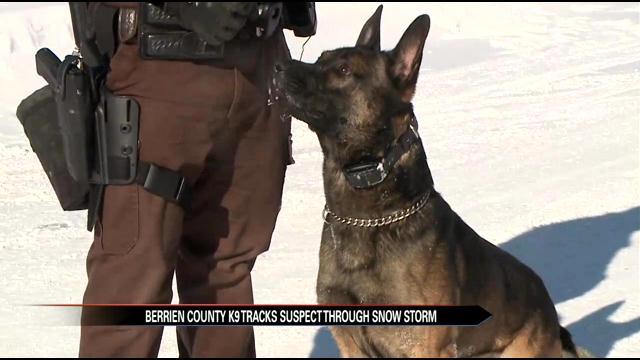 A K-9 officer in Berrien County tracked a suspect several miles in the middle of Sunday's snowstorm. Eventually, the suspect was located and taken into custody.

Pokky, a K9 officer with the Berrien County Sheriff's Department, likes finding drugs and chasing down suspects on the run.

Police received a call that a subject was looking into cars parked in driveways on Oxford street late Saturday/early Sunday.

When officers arrived on scene, the subject fled.

"The individual took off into a ravine, and through a marsh and swamp so it was a wet track but Pokky did pretty good going through there and making his way back around. But when it was all said and done, about 3.5 miles that he ended up tracking,” said Dyer.

Dyer says Pokky tracked the subject through the woods, across i94, and into a neighborhood near Miller Lane in St Joseph Township.

"We got information that he had a grandparent staying in the area and it appeared that he was making his way that way, so officers went ahead of the direction we were tracking, located the footprints in the snow going up to the grandma's home,” said Dyer.

Inside that home they arrested the 21-year-old suspect for breaking and entering motor vehicles.

Dyer says the tracking success rate for K9 officers is 10 percent, but he says Pokky is above average.

"I was surprised that he was able to stay on it that long, most dogs aren't able to keep on a track that long, because they're so tired. But I attribute it to his drive and determination. That's what I love about that dog,” said Dyer.