Kalamazoo victims were car shopping, enjoying a night out 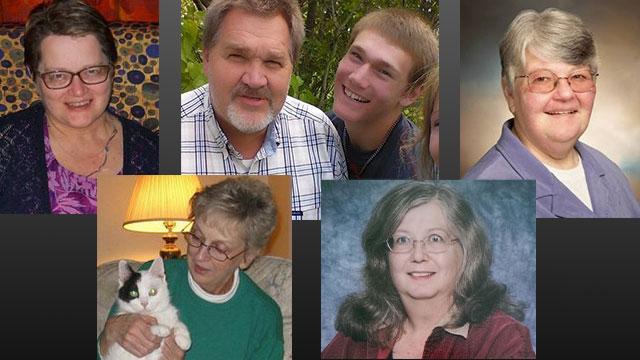 (CNN) -- The four women were old friends and met like they had done so many times before to enjoy each other's company.

Before their casual night out was over, however, they had been shot to death and a young girl wounded at a Cracker Barrel in Kalamazoo County, Michigan, where they dined earlier.

"This is a very close-knit group, and they have gatherings every month a few times together, and that is what they were doing at the time of the shooting. They were out to eat together," Ashby told CNN. "It still doesn't seem real."

Saturday, the women headed to the chain restaurant known for its home-style cooking before reportedly attending a performance at a local university. The school auditorium's marquee says acrobats were performing. The group returned to Cracker Barrel to retrieve their cars.

With them was a 14-year-old girl who was so close to Hawthorne that the older woman would introduce her as her "adopted niece." The girl, identified by her family as Abigail Kopf, was critically wounded but is "holding on," police said.

Their shootings were the last in a rampage that spanned about five hours that left two others dead and another wounded. Suspect Jason Brian Dalton, a 45-year-old Uber driver, is charged with six counts of murder, two counts of assault with intent to commit murder and eight firearms violations.

The victims' autopsies are complete, and the cause of death for all of them is multiple gunshot wounds, said Joanne Catania, chief investigator for the Kalamazoo County medical examiner's office.

This is what we know about them:

Richard Smith, 53, was out car shopping with his son, Tyler, just before 10:30 p.m., according to the Kalamazoo Gazette, when they were shot and killed at Seelye Kia of Kalamazoo.

In a Facebook post, Richard's wife, Laurie, wrote, "Laying in bed trying to comprehend what has happened in the past 24+ hrs ... wishing its all a bad dream and they'll be here when i wake up. I want to thank everyone for the unbelievable outpouring of care, concern, love, prayer, meals, help ... and everything that you've shown me and my family. I am numb. ... I don't know what to say or do and so i wanted to make sure everyone knows how much we appreciate everything ... because I am often not thinking clearly and may not say it when i should."

Tyler, 17, was a senior at Mattawan High School. The teen's girlfriend had joined the father and son at the dealership, Kalamazoo Public Safety Chief Jeff Hadley said, and "she hid in the back of the car and was a witness to what occurred. ... The girl is shaken up as you can imagine."

"The school community is wrapping their arms around her and the Smith family," Hadley told CNN.

"We have kids that are just really panicking a bit," she said.

Tyler was enrolled in the marketing entrepreneurship program and was a student at Mattawan schools since the eighth grade, Buchler told the Gazette. She told CNN affiliate WOOD-TV that the teen was well-liked and always had a smile on his face.

His mother said on Facebook that she loved Tyler and her husband more than anything else and she now feels "lost without my boys."

"My precious baby boy ... taken away before he even graduated from high school. ... I am so grateful to have been blessed with a sweet, caring, witty, handsome boy for almost 18 years ... so proud of who he had become as a young man. I miss you, bud and love you more than life itself."

The Portage-based Kingdom Soccer Club, for whom Tyler played, called him "a talented soccer player, a great teammate, and an exemplary young man."

Hawthorne, 68, died along with her three friends in the third and final shooting.

Hawthorne hailed from Battle Creek. She worked for Kellogg Co. for 22 years and retired in 2008 as a senior analyst for transportation and distribution, the company said.

"We are deeply saddened by these tragic events and brokenhearted to learn that one of the victims ... belonged to our Kellogg family," a company statement read.

Debbie Evans posted to her Facebook page that "Hawthorne was one of the sweetest, and perhaps purely gentle people I came across in all my years with Kellogg."

Mary Lou Nye, 62, and Mary Jo Nye, 60, were sisters-in-law who were friends since they were roommates at Western Michigan, according to the Kalamazoo Gazette. Mary Lou met and married one of Mary Jo's older brothers, and the couple was married for about 40 years. He is a retired auto mechanic suffering from an autoimmune disorder, the couple's son, Bart Nye, told the Gazette.

Mary Lou Nye was the youngest of five children and doted on her grandson, according to Bart Nye. She worked as the manager of the South Haven branch of the Michigan secretary of state's Office before it closed several years ago. Since then, she'd worked at a day care center.

Mary Jo Nye was the sixth in a group of seven siblings, Bart said. She was a teacher at Calhoun Community High School and could inspire troubled students to stay in school, and she liked to sew and quilt, he said.

Tara Egnatuk, the school assistant for Calhoun Community High, told the Lansing State Journal that even though Mary Jo retired about four years ago, she continued to attend graduation every year.

Egnatuk told CNN on Monday, "She was a wonderful person and mentor.? I am getting messages from former students who are heartbroken today sharing all sorts of great memories."

A GoFundMe page has been set up to help cover their funeral expenses, and a woman identifying herself as a former student posted a tribute there, calling "Ms. Mary Jo" one of her most influential teachers.

Jesica Campbell continued, "It hurts my heart to know you won't be making it to my wedding, that you won't see my daughter grow up, that I'll never get to take German lessons, that i can never even share a funny English post with you on facebook. ... May you light up the heavens with your warmth and knowledge and caring heart. You will be truly missed."

Bart Nye told the Kalamazoo Gazette that the sisters-in-law maintained their relationship through periodic outings like the one they were on Saturday night.

Patrick Mallon Jr. said he knew his 74-year-old neighbor as Judy Brown. She was a good person and a quiet neighbor who "minded her own business," he told CNN.

"She'd watch our cat for us when we'd go away," said Mallon, who has lived in his Battle Creek home for 40 years. "We could trust her. That's for sure."

Brown lived alone, Mallon said, but from what he could recall of their conversations, she had two sons who lived out of state. Mallon grows cucumbers, he said, and he'd share some with Brown after the summer harvest.

"She'd take them and usually make something and we'd get something in return," he said.

Another neighbor described Brown as "the sweet little old lady of the neighborhood."

Daniel Arnold lived next door to her for three years and said most people knew her as "Judy." He told CNN affiliate WXYZ-TV that she lived with her two cats, and even though she suffered from emphysema, he saw her regularly.

"It was an everyday thing," Arnold said. "If she wasn't out here doing something in the front yard, she was in the backyard taking care of things."

Unity Christian Church in Battle Creek said in a statement that Hawthorne and Brown were "beloved friends and active members." Brown was the treasurer on the church's board of trustees. The church said its congregants are "left feeling dazed in disbelief."

"Numerous prayer vigils are in process throughout the local community, and we invite you to add your compassionate thoughts and prayers to this growing consciousness of love, peace and healing," the statement said.

Brown attended Lakeview High School in Battle Creek and Western Michigan in Kalamazoo, according to her Facebook page.

The two victims who lived

One woman was wounded when the first shooting occurred. Tiana Carruthers was in an apartment complex with her three children, police said, and is expected to recover.

Abigail, the girl shot at the Cracker Barrel, is still on a ventilator, critically ill, according to Dr. Aaron Lane-Davies. He told CNN affiliate WOOD that Abigail's heart had stopped and doctors at Bronson Methodist Hospital got it beating again.

Hadley said the girl is now responding to verbal commands.

She was initially kept on life support over the weekend so her organs could be donated. While her mother, Vicki, was holding her hand, she suddenly squeezed back.

Vicki Kopf described the moment as "breathtaking. ... A miracle on its own."