Karimu to be sentenced Thursday 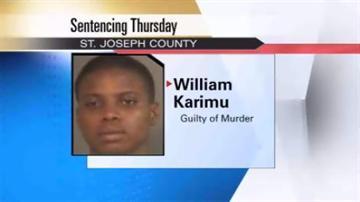 SOUTH BEND, Ind. — The man who pleaded guilty to the murder of a woman on Mishawaka's northwest side will be sentenced on Thursday.

William Karimu killed Lois Hickey in December 2011 at her home during an attempted robbery.

He was charged with her murder, as part of his plea agreement.

He has been locked up in the St. Joseph County Jail since September.

Karimu was brought back from Africa to face murder charges.