Kayaks out in flooded Miami streets after Tropical Depression Emily 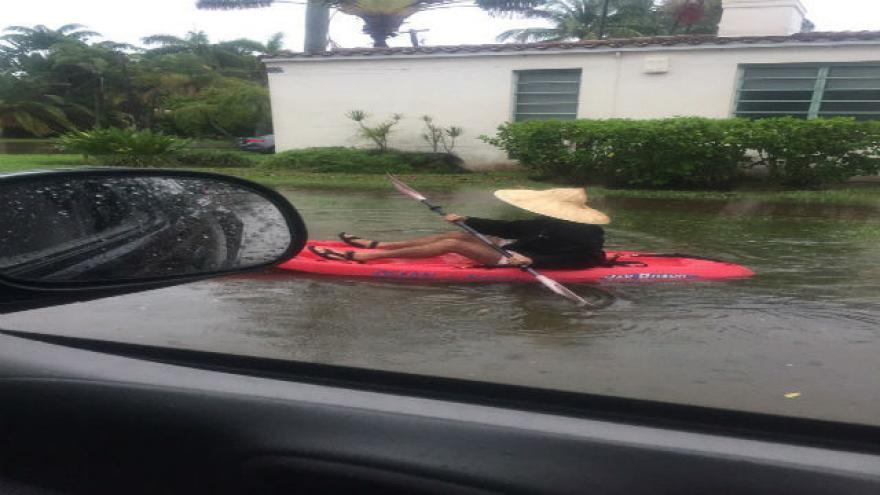 By Nicole Chavez and Amanda Jackson

(CNN) -- The remnants of Tropical Depression Emily prompted some Miami residents to take to the flooded streets in kayaks.

Though Emily was downgraded from a tropical storm to a depression Monday night and moved out to the Atlantic, heavy rain still hit the Miami-Dade area on Tuesday.

Some drivers ended up stalled out in high waters while others -- not wanting to take a chance -- ditched their cars for kayaks and paddle boards.

Rains were heavy enough in Miami's downtown and Brickell neighborhoods that manholes could be seen spewing water.

The rain overpowered the city's new stormwater system. Miami Beach Assistant City Manager Eric Carpenter told CNN affiliate WPLG that Tuesday's rain had "significantly higher intensity" than what the system is designed to handle: nearly 8 inches of rainfall and a peak of intensity of around 3 inches per hour.

People were left stranded after work in parts of Miami.

"So ... I'm trapped at work," Instagram user duchess_natasha wrote. "The Publix across the street has closed and sand bagged their doors to keep the water from rushing in. Cars are stalling out along the street. And then you have the guy who made a raft out of a floating barricade. Well, at least there's food and alcohol here at work."

The storms began to dissipate Tuesday evening, but there's still a chance of rain Wednesday "due to lingering moisture in the air and the interaction of the sea breezes," Guy said.

Florida's usual sunny skies and hot temperatures will return by Thursday, he added.