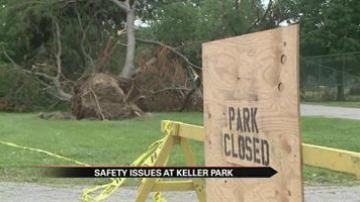 SOUTH BEND, Ind.-- It's been nearly two weeks since 11 tornadoes tore through Michiana and the Keller Park neighborhood is still recovering from the storm damage. Residents are upset that the park hasn't been cleared of all the debris.

Roger Berg said, “It’s like if you toilet in your house is clogged, you can argue about it and everybody debate whose going to fix it or call a plumber but believe me, there are some things that have to be done no matter how costly they are.”

“They have a lot of work left to do. Keller Park is devastated," said Berg.

While residents are trying to take storm cleanup into their own hands, the city is advising that they leave it to the professionals.

On his bike ride, Berg said he almost saw an accident.

“All of a sudden he stopped sawing and the thing started coming down and he ran like heck to get out of the way. I could have been a witness of a fatality," said Berg.

The President of Keller Park Neighborhood Bootsie Grant said she is worried that someone is going to get hurt by falling limbs or wires.

Grant said, “They don’t see if they climb on that tree and it rolls, or continues to fall over, or you touch a live wire, you’re seriously going to get hurt.”

Grant said she has seen children ignore the closed park signs and play on the swing set.

“Thank God we didn’t have any casualties. But I mean with the trees down in that park and the kids not paying attention to the tape, I can’t guarantee what’s going to happen," said Grant.