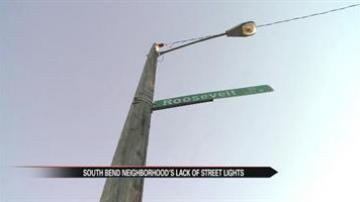 SOUTH BEND, Ind. -- When the sun starts to set, and people make their way home for the evening, that's when Daniel Santana knows it's best to stay inside.

"I've seen people breaking into cars and I've heard noises I shouldn't be hearing at 2 o'clock in the morning," Santana said.

He and his neighbors said theft is common place in the Keller Park neighborhood, partly because those who steal are able to get away with it.

"If you don't have your porch light on, you're missing three or four houses in between the next streetlight - which is down at the other corner."

Concerned, we took a look for ourselves.

Night-time video we shot shows just how difficult driving can be. In certain parts of the city, there's one street light every half-mile.

William Petzold wants change, but he said, he isn't expecting it.

For the last 30 years, he's been trying to get the city to help, going beyond the light situation.

Petzold would like to see Keller Park cleaned up - and basic things added - like sidewalks and stop signs.

"It's the attitude to people in life anymore. If it doesn't directly benefit them, they really don't care," Petzold said.

But we do, so ABC57 News dug a little deeper to see just how serious the problem is. There are some streets that don't have any lights at all.

An issue neighbors say is only going to change if others come forward.

"Get involved in the neighborhood and speak your voice," Santana said. "We can't get anything done, unless you're talking too."