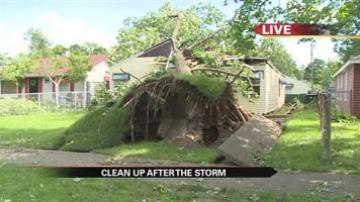 SOUTH BEND, Ind. -- Residents in the Keller Park neighborhood are trying to clean up after the storms knocked trees onto houses and cars. It was one of the hardest hit neighborhoods in Michiana.

"I was able to come out and see everything and I was just flabbergasted at how it looked you know," said Barb King, a Keller Park resident for 54 years.

All over south bend, roads are blocked by fallen trees. Light posts are shattered and utility poles are snapped in half.

Resident Craig Rideout says a tree in his back yard was uprooted.

"Totally uprooted. I couldn't see. All I know is I looked out the window and I didn't see the tree anymore," said Rideout.

"It would have crushed the house definitely. God was with me that's for sure," said Rideout.

A few of his neighbors weren't so lucky.

King says she's never seen a storm do this much damage.

She says the fallen trees and power outage are an inconvenience, but it could have been worse.

"Look what really did happen and it could have been very serious you know," said King.