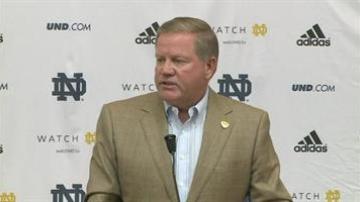 NOTRE DAME, Ind.-- This Saturday the Irish and the Trojans will be meeting for the 85th time in series history. In order to win this rivalry game, Kelly says the Irish have to get off on the right foot from the start.

“The speed that USC has especially on the offensive side of the ball is the biggest thing we have to be prepared for right out of the gates and so we’ve made our defensive players in particular aware of the speed of the game,” Kelly said.

A fast start for the Irish is crucial this week. Notre Dame's losses to teams like Michigan and Oklahoma prove they can't lose momentum early on.

“Against good teams, you have to get off to good starts and when we haven’t we’ve struggled and our team knows it, our players know it and it will be important again on Saturday against USC,” Kelly said.

USC averages about 190 passing yards per game, ranked 102nd in the nation, and with returning receivers like Marquise Lee who had 30 receptions for a total of 385 yards in five games, they are a threat to the Irish defense.

“We actually showed them 2011 film with Woods and Lee and all of the weapons that they have because the speed of the game is going to be out there. Our guys have to be ready,” Kelly said.

The Trojans boast an even better ground game, ranked 39th in the nation and averaging 200 yards per game, another reason Kelly says the Irish can't afford to hesitate this Saturday.

“Coming off of a bye week the biggest thing that we concern ourselves with is the speed of the game right away,” Kelly said.

USC has won nine of the last eleven games against the Irish and two of those losses for the Trojans each took place in the last four years during Kelly's time here at Notre Dame.
Share this article: