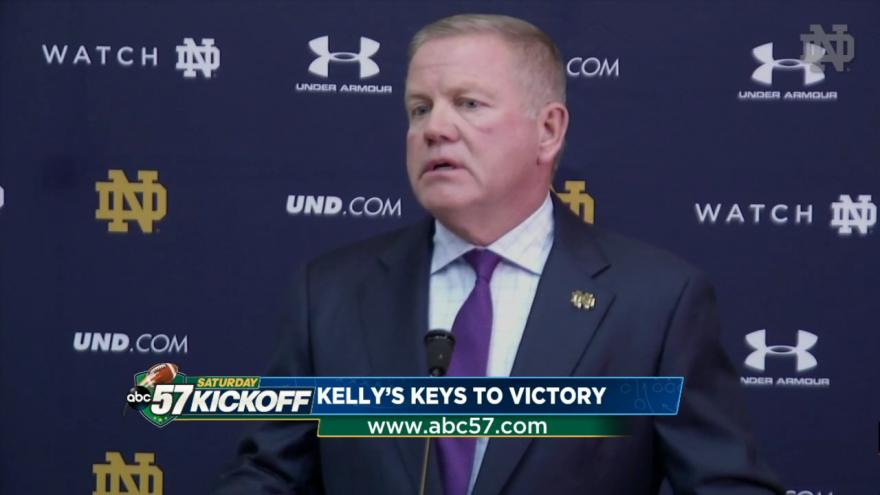 Notre Dame is hot off wins at Boston College, Michigan State and Miami of Ohio. North Carolina has just one win this season. Brian Kelly shares his keys to victory for Saturday's game.

"This weekend with North Carolina, there are some similarities in the sense that if one would look at their record, you may get the similar sense that it's a 1-4 football team, and it is. But four of the five games they've had a lead going into the fourth quarter. If you watch their film last week against Georgia Tech, that's a battle going late into the game. It's 7-0 and they are playing hard and physical. Coach Fedora has got this football team, the morale is good. They are playing hard," Kelly said.

The Irish need to capitalize on their rushing attack while UNC was effective early against the run last week.

The Tar Heels have been riddled with injuries including two of their starting front seven.

They wore down in the second half and gave up 401 rushing yards to Georgia Tech.

But Kelly isn't looking past their talent.

"So we're going to have a great challenge on our hands. So looking at who they are on film, looking at the athleticism that they have, the production is one where we'll have to play up to our standards that we have set, and that's the most important thing. Not looking at anything else but the film and how they've played their opponents over the past five weeks," Kelly said.

With quarterback Brandon Wimbush experiencing pain in his foot this week, backup Ian Book could see more playing time against the Tar Heels.

"We're a 6/4 rep split operation, so he's been getting a lot of work through camp, through the season.  He's got a lot of meaningful reps," Kelly said.

Offensively, the Tar Heels need to rely on the run.

Jordan brown was a lone bright spot against Georgia Tech, with 98 all purpose yards.

He can catch passes out of the back field, giving red shirt freshman quarterback Chazz Surratt another option.

Something Coach Kelly says his cornerbacks need to be prepared for is reading the receivers so they can turn and make plays on the ball.

"If he's in press and he doesn't get a good collision and he gets beat off the line of scrimmage, he can't turn back for the ball, so he's got to play through the receiver and break through the basket. If he's an off man, we want to stay on top of the man at all times," Kelly said.