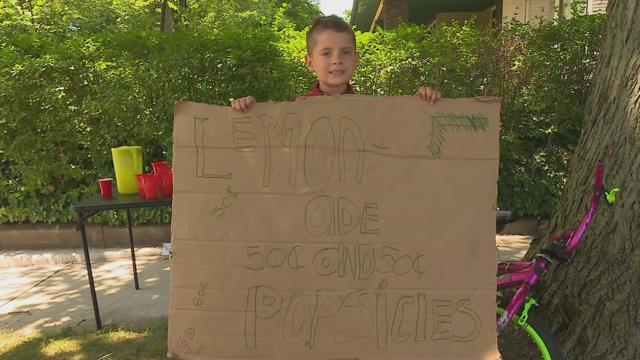 A group of 10 to 15 kids wanted to do something to show that there’s good in their community after the triple homicide that occurred Sunday right on Strong Ave.—right around the corner from where they set up.


“There was just a triple homicide on the corner of the other side of the street, so we just wanted to be happy and have fun,” said Aniya Jones, who was one of the masterminds behind the lemonade stand.

That triple homicide happened a few blocks away from where all these kids live.

“Like it shocked me. I didn’t know it was going to be this close to me,” said Chris Beal, one of the kids who was selling lemonade to passersby.

Many said they heard the shots Sunday night. Some even knew the victims.

So, Tamaurse Ruiz-Goins and his friends set up the lemonade stands Tuesday and Wednesday to bring the community together.


“We had to learn to pull everyone to come in to help this community and to help everyone out to make things better and for nobody to focus on what happened over there, because it’s in the past,” said Tamaurse Ruiz-Goins.

It’s an innocent idea that seems to be having the intended effect.


“I think that’s where it starts is when the kids take responsibility and come together like this, then maybe us adults can learn from them,” said Hattie Contreras, one of the kids’ customers.

And miss Aniya Jones and friends are helping to pave the way.

“We get to bring the community back together. Just cause that tragedy happened, it’s not going to stop us,” said Aniya.