King Cobras smuggled into US in potato chip cans 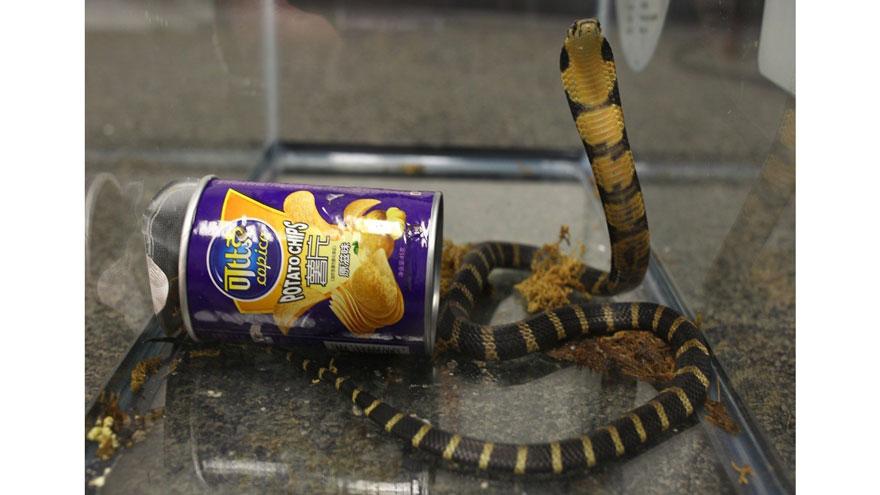 By Artemis Moshtaghian and Euan McKirdy

(CNN) -- Three deadly king cobras in potato chip cans led to the arrest of a Southern California man on suspicion of illegally importing the snakes and other reptiles, according to a news release from the Los Angeles District Attorney's Office.

The man, named in an affidavit seen by CNN as Rodrigo Franco, was taken into custody after United States Customs and Border Protection inspected a package from Hong Kong and discovered the three live, 2-foot-long snakes crammed into potato chip canisters.

In addition to the snakes, the parcel, sent through the United States Postal Service, contained three albino Chinese soft-shelled turtles, according to the affidavit.

The snakes were seized by Customs and Border Protection due to the danger they posed, but the turtles were delivered to the suspect's house in Monterey Park, California, where special agents from the United States Fish and Wildlife Service raided the address.

While executing a search warrant, agents found the package that originated in Hong Kong in a bedroom, where they also discovered a tank containing a live baby Morelet's crocodile and tanks containing alligator snapping turtles, a common snapping turtle, and five diamondback terrapins, all of which are protected species, according to the affidavit.

Franco, 34, was charged with one count of illegally importing merchandise into the United States.

During a subsequent interview with authorities, Franco said he had received 20 king cobras in two prior shipments, but said all those snakes died in transit.

During the investigation, authorities said, they obtained evidence from Franco's phone that revealed messages in which Franco and an individual in Asia discussed shipping turtles and snakes between the United States and Asia.

According to the complaint, the messages indicate that Franco had previously received live cobras from his contact in Asia and was going to give five of the snakes to a relative of his contact.

If convicted, Franco faces a statutory maximum sentence of 20 years in federal prison.