Kitchen table at Mishawaka Fire Station a 'Snapshot in Time' 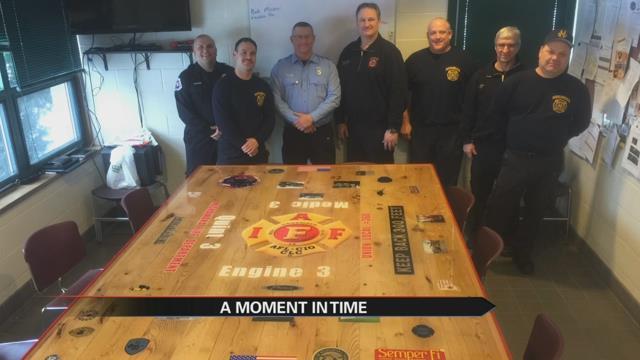 Firefighters will tell you they are like a family.

They work together, live together, and even eat together at the kitchen table.

But the table at Mishawaka’s Fire Station No. 3 is different, thanks to Michiana residents.

“23 years we had a folding table,” says Mark Ryan, a Captain at Mishawaka Fire Station No. 3.

Captain Ryan, a self-proclaimed Pinterest fan, saw the idea while browsing the app one day.

The reaction from his peers? Priceless.

“Most of them didn’t know what pinterest was so I’m far more advanced than they are,” says Ryan.

With the help of President James Elliott and the Mishawaka community, the table took shape.

“Went to a few business in the community and asked them for help. We didn’t expect the donations we got, but we had Shambaugh and Sons, a commercial sprinkler builder in the city donate the entire base and constructed it for us also,” says Elliot, President of Firefighters Local 360.

The table top is solid oak donated by Hoosier Box and Skid.

“We had everybody at the station able to submit design ideas, pictures, patches, anything that they would like, we gave them a deadline and once that deadline came, we all got together to place everything on the table,” says Elliott.

29 current names skirt the table, as well as pictures of heroes from the past.

They are pieces of history that are important to the men who serve our community and put their lives on the line.

His Great-Great Uncle , Captain Otto Goeller, then with Fire Station No. 2, is one of three service men honored at the table, who died in the line of duty

Otto Goeller died fighting a fire in Mishawaka in 1939.

And now both Otto and Shawn are stamped and sealed in history together.

“This is a family to us. We’re here a third of our lives, we call each other brothers and sisters, so this is another family when we’re away from our families at home,” says Elliott.

A third of their lives that can now be spent around a new table filled with snapshots from past to present now  etched in eternity.

They celebrated one of their first meals with chicken and dumplings with the two companies that helped design the table.